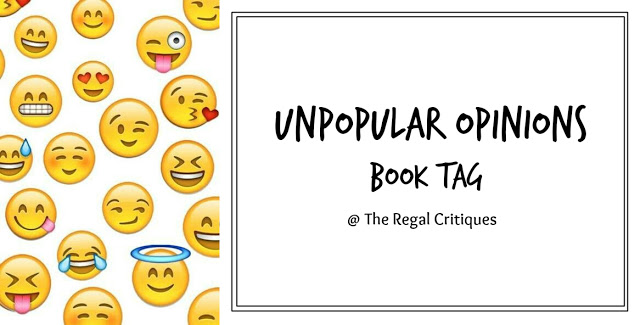 Hello lovelies! Considering how much I love to write negative reviews here at The Regal Critiques, it seems unbelievable that I haven't yet done The Unpopular Opinions Tag. Today I finally correct that mistake. Without further ado, let me share all my unpopular opinions with you.

There are SO MANY I could mention, but let's see one that (I don't think) I've talked about before - The Host by Stephenie Meyer. It has to be said that there's a lot of hate surrounding this novel and the author in general, but I find that those who love this novel are the majority. As for me, I could not stand this book, especially because of the complicated relationships and the confusing feelings of the characters towards each other.

Again, I have a vast amount of books to choose from, but I'm going to go with a more recent one: Asylum by Madeleine Roux. There were some problems with this novel - the biggest one being the characters - but it was enjoyable and even scary at times + I LOVED most of the pictures.
Here's a very unpopular opinion: I actually think that Asylum was more enjoyable Miss Peregrine's Home for Peculiar Children. #sorrynotsorry

An OTP I did not ship, AT ALL, was Eleanor and Daniel in the Something Strange and Deadly trilogy. At first I was all for their romance, but in the second book Daniel's complete refusal to accept Eleanor with her magic was a huge turn off for me. However, I could have dealt with that, if he changed his opinion later on or even tried to understand her like the other Spirit Hunters, but he remained un-accepting until the very end.

Probably sci-fi. Though these days I feel like most books I read are a mix of different genres, which makes it really hard to avoid genres I don't really like. For example, These Broken Stars is a sci-fi, but it's heavy on the romance, as well, so I picked it up for that and never regretted it.

I'm thinking Tris and Four from Divergent. I used to love them, both as individuals and as couple/team, but I was super-disappointed in them for all the secret keeping that went on in Allegiant... and Insurgent, come to think of it.

Colleen Hoover, without doubt. I've only read her Slammed series, but from what I gathered, her other novels aren't truly different from it, so I'm not missing out on anything.

Love triangles, definitely. I hate unnecessary drama and they add a lot of that to the story. Plus, in a lot of cases love triangles take the focus away from the plot... or try to pass as the plot.

Throne of Glass by Sarah J. Maas, even though one of my friends is CRAZY IN LOVE with the series. I've never been really interested in it, but all the negative stuff I've heard about it since the last book was released truly convinced me not to read it.

This is probably going to be the most unpopular opinion in this post, but I actually enjoyed The DUFF movie more than the book. Bianca annoyed me SO MUCH in the book with the way she judged everyone (including her best friends) for being different from her. However, the movie was a lot of fun and the actors did an awesome job, in my opinion.