Paula Hawkins - The Girl on the Train

“I have never understood how people can blithely disregard the damage they do by following their hearts.” 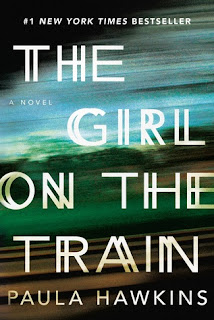 The debut psychological thriller that will forever change the way you look at other people's lives.

EVERY DAY THE SAME
Rachel takes the same commuter train every morning and night. Every day she rattles down the track, flashes past a stretch of cozy suburban homes, and stops at the signal that allows her to daily watch the same couple breakfasting on their deck. She’s even started to feel like she knows them. Jess and Jason, she calls them. Their life—as she sees it—is perfect. Not unlike the life she recently lost.

And then she sees something shocking. It’s only a minute until the train moves on, but it’s enough. Now everything’s changed. Unable to keep it to herself, Rachel goes to the police. But is she really as unreliable as they say? Soon she is deeply entangled not only in the investigation but in the lives of everyone involved. Has she done more harm than good?

Despite my initial reservations about picking this much-hyped book up, I decided to go ahead with it because I felt like I couldn't bear not knowing what all the hype was about, and am I glad I did! The Girl on the Train was a fast-paced, completely engrossing read, despite the beginning being kind of mind-numbingly boring. Don't get me wrong, I was 100% invested in the story throughout, but I just couldn't wait for the story to properly take off. Once it did- what a roller coaster ride the author took me on! Is this really her debut? Mind-blowing!

The portrayal of alcoholism and its consequences was done really great. Characters, though, I felt they could have been better crafted. Each of the main characters had a very monotonous voice that at times it felt like they were all one person and that's certainly not something I like. One other huge gripe I have is that I zeroed in on the main villain pretty early on. It was kind of obvious, for me at least, so it was just a matter of reading what was left of the book to confirm what I already suspected.

Unconventional narrator/protagonist, missing woman, husband under suspicion, cheating, pregnancy, multiple POVs in tricky, intelligent writing and human nature in all its horrifying glory...comparisons to Gone Girl are, of course, inevitable. However, such comparisons would have undoubtedly resulted in more than a few disgruntled readers, as is obvious by number of people who have expressed their distaste over the comparison. This one didn't quite pack the punch that the previous did, and I'd definitely vouch for Gone Girl if it comes down to choosing one over the other. I still loved The Girl on the Train. Very much. And I cannot wait for the movie!