“It's certainly a travesty of education, Sister, when those charged with the noble task of expanding our children's minds should try to cage them.” 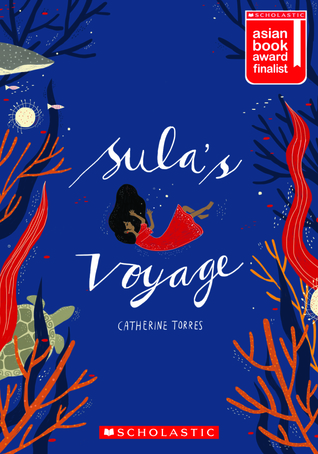 Fifteen-year-old Sula has always known she is different. Even though her parents have shown her nothing but love and acceptance, she sees her dark skin as a reminder of how she doesn’t fit in with the rest of her family.

What’s worse is she also feels that her parents are hiding something from her. After getting expelled from school, Sula reluctantly goes to stay with her mother’s friends. There she unexpectedly finds herself on a journey of self-discovery — a journey that keeps drawing her to the sea. Sula must not only figure our her parents’ secret, but also just how different, and possibly magical, she really is.

I was given a free copy for an honest review.
Thank you!

Sula's Voyage took me on one magical journey, in the Philippines, a gorgeous place that I've never had the chance to read about before. However, despite being a quick read, built on a very unique and lovely story idea, I couldn't help feeling like it didn't live up to its potential, thus it was far from being a spotless read.

My first, and foremost, problem was the writing, which might sound strange to our regular readers, because that is one aspect of books that I rarely complain about. The writing was... strange. It was good at some parts, while at other parts I was left being confused because of how jagged and all over the place it was. Moreover, many scenes ended without any kind of closure, making me feel as though huge chunks of the novel were missing.

That feeling only intensified as I progressed with the novel - the description of the relations between the characters was quite lacking. Partly, I believe, that can be thanked to the characters not being developed enough, but more on that later. Sula's relationship with her parents was GREAT, though there were some scenes - particularly with her mother - where even this relationship wasn't fully developed, but overall I was content with their interactions.

To stay on the parent/children root, let me bring up (Tita) Lupe and (Tito) Guido's way of bringing up their three children - Pablo, Pedro (twins) and Maria. To say the least, parents experimenting on their twins by sending one off to regular school, while homeschooling the other, was close to cruel and kind of unbelievable, too, especially when it did feel like they loved their children. That said, I did like this part of the story, because it showed parents making mistakes - which happens, but is oh-so-rarely portrayed in books - and their children forgiving them as adults.

The romance was by far the weakest part of Sula's Voyage - and to top that off, there was a love triangle introduced into the story around the 50% mark, which had no purpose whatsoever. The first - and 'main'- love interest was James, an 18-year-old, who Sula met on her father's university class that she had permission to visit, after she was expelled from high school. I'll have to admit, I had a hard time believing that Sula's father was more than happy about his 15-year-old daughter getting close to an 18-year-old guy. Anyhow, Sula and James's story could have been cute, if only we'd seen more than a few parts of the months they spent as friends, heading into relationship territory.

Then came Pablo, who seemed to hate Sula, until he didn't anymore. On the contrary, it turned out he's been in the creepy kind of love with her, ever since they were little. I was not amused by this. Neither by how the relationships were wrapped up in the end.

Sula's Voyage had a very historical fiction feel to it, if not for mobile phones, wi-fi and Facebook being mentioned, I'd have been completely lost, never knowing when exactly the story took place.

The promising diversity of the main character was one of the reasons why I said yes to the novel, but it ended up being a disappointment. How come Sula never even wondered about being adopted, even though she had a completely different skin color than her parents? Neither did she suspect her mother sleeping with another man - which, I guess, is the conclusion others had. And what's wrong with being adopted anyway? It was explained why her parents felt the need to keep her identity as a secret, but that just felt like a cheap excuse to me.

As for the characters - Sula was alright, yet I wasn't completely sold on her character. She cried more times than what you'd expect in soap operas, for reasons that were just mindblowingly stupid. I'm also confused about her age. Why make the main character around three years younger than the other (young) supporting characters who she'll get close to?

Obviously, Sula's Voyage wasn't all bad. For one, the spiritual elements - call them myths, or what you wish - make the book stand out for its uniqueness. I loved learning more about Philippine traditions, meals and myths - so, despite my low rating, I'm not sorry I picked up this novel.

Some scenes were really, really great - for example, the scene where Sula's parents went to her former school to take her home was positively epic. Same can be said about other parts of the novel, like Sula and Maria becoming friends, or Sula receiving that random vendor's help when she got lost.

While I was vastly disappointed in some aspects of Sula's Voyage, I still praise Catherine Torres for daring to write outside the common settings authors prefer to use - like the US or UK. The diversity, while undoubtedly handled in a strange way with Sula, was a huge plus too.

Would I recommend reading it?
Well, I won't be pushing anyone to read it, but if the blurb and what I said stroke you as interesting, then go for it.