“I am a girl of definitions, of logic, of black and white” 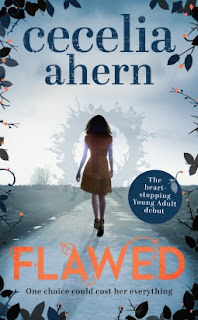 The stunning YA debut from internationally bestselling author Cecelia Ahern.

In this stunning novel, bestselling author Cecelia Ahern depicts a society in which perfection is paramount and mistakes are punished. And where one young woman decides to take a stand that could cost her everything.

It's been ages since I read a book in one sitting, but I just couldn't make myself put this one down even though I needed to because it was just so devastating at one point- it was completely captivating and had me hooked right from the get-go. I was really skeptical about picking this one up- mainly due to this being the author's first attempt at YA, but also because the reviews I had so far come across had been quite mixed. However, I have immense trust in Cecelia Ahern's writing, as is evident from my love for her previous works, and this is what made me finally pick this book up.

This is the story of the perfectly flawless Celestine North who always abides by the rules. She lives in a society where everyone is bound by the rules set up by The Guild save a country that had spent decades struggling to recover from an economic collapse. The Gild strives for perfection among the citizens of the country by enforcing very strict moral and ethical codes, and anyone who has been found to have breached their rules would be literally branded forever as "Flawed". Perfect daughter to her parents and perfect girlfriend to Art, the son of Judge Crevan- the leader of The Guild, Celestine thinks she has it all figured out until she makes one tiny mistake. A mistake that would bring upon her the wrath of Judge Crevan and ultimately cost her everything she holds dear.

"I know the difference between right and wrong. I understand the rules. But today I feel that the rules have been blurred, because today they were literally on my front doorstep."

I was not at all surprised by the writing- it is, after all, Ahern's forte. The world-building was just terrific, and the author succeeded in making this bizarre dystopian world seem very realistic indeed. Right from the first page, we get to see how this world functions- everything is so perfectly woven together that halfway through the book you'll feel like you've known this world and these characters forever. The pacing was just right, and I was held captivated throughout the book as we got to experience everything that unfolded through Celestine's POV. It felt remarkably realistic since everything was written in a very detailed manner...so much so that you'll feel you're right in Celestine's shoes when everything unfolds.

Celestine was a very strongly developed character, and so were the other side characters. I quite liked Art at the beginning, but that just deteriorated fast. Carrick was a very interesting character whom I hope to see of more in the sequel, and oh my, Judge Crevan was just despicable. I have no words to describe just how painful a death I wish upon him. There was a scene at about 1/3rd into the book that literally brought tears to my eyes because it was just too horrific. Oh Crevan, may you rot in Hell. There were a lot of relationships that were portrayed in this book and perhaps not as much focus on each of them as I would have liked. That would be the only grip I have about this near-flawless book.

Family values, emotions, diversity, justice, revenge- this book has everything. Just don't go into it expecting an out and out dystopian fest since this one focuses more on the people themselves- and that's exactly what I love the most about Cecelia Ahern. Trust me, you need to pick this one up.