“We breathe in madness. We exhale insanity.” 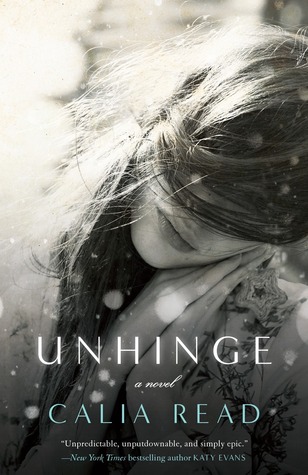 Victoria can’t recall much of her life before she came to Fairfax Hospital, but she prefers it that way. She holds her beautiful baby daughter, Evelyn, every day and that’s enough…isn’t it? But when Evelyn is taken from her, Victoria’s world begins to fray at the seams. It becomes apparent to her that the hospital walls aren’t the only obstacles standing between her and the outside world—Victoria has constructed a hall of mirrors deep inside, every false image a distraction from the trauma of her past life. A white picket fence, a family on the way…yet something feels amiss in her memories of a happy marriage. When a handsome stranger begins visiting Victoria, pressing her to remember her past, she struggles to separate real memories from refracted images she has created, knowing at last that only the truth can set her free.

This review contains spoilers - to see them you only have to highlight the text.

First of all, I have to mention that Unhinge is technically part of a series, a companion to Unravel. The main connection between these two novels is the setting: Fairfax, an institution for mentally ill people. Also, if you've read Unravel, you probably know who Victoria is - a patient, who earned the nickname Mommy Dearest for carrying around a plastic doll, thinking it her daughter, Evelyn.

Now that's out of the way, I'm going to list separately the things I liked and disliked in Unhinge, because I have quite conflicted thoughts on this novel.

"I'm beginning to see the truth has its price.
It's your sanity it wants and craves more than anything."

Overall, Unhinge definitely wasn't a terrible book. It just didn't work for me for the reasons I mentioned above. Will I read other novels by Calia Read, though? Of course, she is AWESOME. Duh.