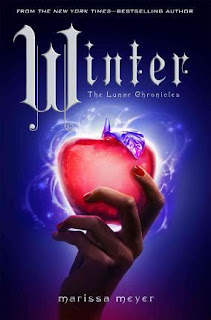 Princess Winter is admired by the Lunar people for her grace and kindness, and despite the scars that mar her face, her beauty is said to be even more breathtaking than that of her stepmother, Queen Levana.
Winter despises her stepmother, and knows Levana won’t approve of her feelings for her childhood friend—the handsome palace guard, Jacin. But Winter isn’t as weak as Levana believes her to be and she’s been undermining her stepmother’s wishes for years. Together with the cyborg mechanic, Cinder, and her allies, Winter might even have the power to launch a revolution and win a war that’s been raging for far too long.
Can Cinder, Scarlet, Cress, and Winter defeat Levana and find their happily ever afters?

She was prettier than a bouquet of roses and crazier than a headless chicken. Fitting in was not an option.

Overwhelmed would be the word to use if I were to describe in one word what I feel for Winter, the fourth book in the Lunar Chronicles. Looking back on the books as a series, I’d say Cress was my absolute favorite, with Winter coming a really close second. Okay, let me be frank here: I honestly don’t know how to go about with this review because my thoughts are all over the place and I do so don’t want to spoil this book for you. So, let me just run a quick analysis on the plot, writing, and characters in general.

It did not feel like home. It felt like a place that had been built to be paradise, but had become a prison.

This book takes place entirely in space, with almost all the action being on the moon. Cinder and the gang are ready to overthrow Levana, and as time goes, the Luna queen begins to lose control- which turns her into a deadlier than ever before viper, poised to strike at any moment. Chaos, surprises, battles and heartbreaks- this book has it all.

While I did love everything about the book, one thing that kept constantly nagging me was the pacing, which felt a teensy weensy bit off to me, and some of the occurrences felt, IDK, quite unnecessary too. There were certain points where I felt the plot could have been smoothed over better, and the final battle between Cinder and Levana was a little underwhelming too, to be honest, but that doesn’t make me like this book any less. There was such a host of characters and subplots to be taken care of, so you can have my word for it when I say the author has done one heck of a job with tying up all the loose knots and bringing this series to a beautiful end!

If she’d learned anything from Thorne, it was that sometimes gumption was all a person really needed to be heroic.

I loved seeing Cinder and the rest of them together and I can honestly say I loved all of them to bits in this book. Iko was awesome as always- and my, her sarcasm sure has improved! The ships- Cress and Thorne are still my favorite, but Winter and Jacin did give them tough competition, not to mention Cinder and Kai AND Scarlet and Wolf. Who am I kidding? I loved them all- even Thorne and his Rampion!! Winter deserves a very special mention here- she was so freaking adorable and my heart just BROKE for this beautiful, endearing, slowly-losing-it girl, and, oh, Jacin. He was much more likable in this book too! I didn’t care for Wolf much, but trust me, you are going to LOVE them all!

“All I ever wanted were two legs, ten fingers, and perfect hair. Is that really so much to ask?”


Winter is certainly going to take fans of this series on one memorable, satisfying ride and I really need to pick up Stars Above soon!