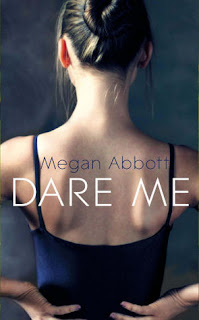 Beth and me wedged tight, jeaned legs pressed against each other. The sound of our own breathing. Before we all stopped believing a tornado, or anything, could touch us, ever.

Addy Hanlon and Beth Cassidy are tough, inseparable, invincible. No pair more charismatic or sophisticated. No pair more dangerous. But with the fall term, their new coach arrives and things begin to change. She has plans for the cheer squad: all sleek poise and cool command, the girls are soon entirely in her thrall. Faster, harder, higher, thinner, the stakes raised, their world contracting, they compete to risk – everything. She, meantime, has been crossing a line of her own.

From the brilliant author of The End of Everything, Dare Me is a searing novel about the allure of adulthood and the dark heart of adolescence: the fierce bonds between girls, their bitter rivalries, and their power to transform one another.

"You see these glitters and sparkledust and magicks? It's war paint, it's feathers and claws, it's blood sacrifice."

I don't even know where to start this review. Starting at the beginning would be apt, I suppose. Well, let me make it clear to you that the only reason I picked this book up and stuck with it till the end- even though I knew this book wasn't for me right from chapter one- was because I saw it on quite a few lists of books for people who liked Gone Girl. What the fudge? Damn, what a way to make people pick this book up. There couldn't be any book less like Gone Girl- it failed in all the ways the latter scored.

Where in Gone Girl we had a true riddle wrapped in a mystery inside an enigma in the form of Amy Dunne, here we had empty, vain, ostentatious girls pretending to be so. Gah.  Where there we had truly intriguing, enrapturing writing, here we had pretentious, trying-to-be-deep-and-noir writing which I frankly found very, very boring. Let me stop with the Gone girl comparisons- because you and I both know not any book can easily compare with that masterpiece by Gillian Flynn- and tell you what I actually found lacking in Dare Me.

The plot. We get pulled into the warped world of this coach, along with the two main characters, Addy and Beth, where we see the sad state of her family life and her *drumroll* love triangle. The synopsis of this book was way better than the actual story, let me tell you. None of the twists surprised me and the final reveal was so underwhelming- and that being the only reason I kept on reading till the very end only made me even more furious. But in all fairness, this book could have been much better if only one thing was better-

The writing. Did this book even undergo editing? Because it seriously lacks in story-telling finesse. The language used by the girls was very artificial and so was the narration. This book screamed wannabe noir! at me and there were many a times when I had to stop reading just to bang my head against the wall.

The characters. I found myself being unable to relate to any of the characters- and a good thing at that- because what we got was a cheerleader squad full of backstabbing, cheating, drinking, smoking, pill-popping teens who all seemed to have grown up in the absence of any parental care and were in the brink of dire moral bankruptcy. We then get their delightful new coach who finds it perfectly alright in having the girls drink and smoke in her presence with no indication whatsoever that this is not right. Honestly, none of these characters had any redeeming features- and the same could be said of the book itself.

The relationships. They were all very under-developed and made me constantly feel like the author didn't bother giving them her time of day. And I really couldn't understand why the coach was even looked up to by her minions because she was intentionally verbally abusive toward them, not to mention all the emotional trauma she made them experience. There was a lot of stuff that was barely touched- Addy's obsession with the coach's husband, Addy and Beth's weird relationship, Addy and the coach's even weirder relationship, Beth's questionable actions, the pseudo-lesbianism and the bloody murder itself. None of this was properly dealt with and the ending made me even more mad at the author.