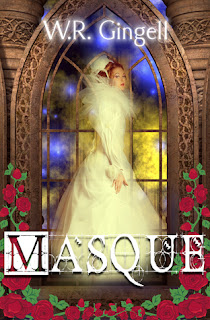 Beauty met the Beast and there was . . . Bloody murder?

In the library is Lord Pecus, a charming gentleman whose double mask hides a beastly face, and who has decided that Isabella is the very person to break the Pecus curse.

In the ball-room is young Lord Topher, who is rapidly falling in love with an older woman.

And in the card-room, lying in a pool of his own blood, is the body of one of Isabella’s oldest friends: Raoul, Civet’s Head Guardsman. The papers sewn into his sash seem to suggest espionage gone wrong, but Isabella is not so certain.

Will Isabella find the murderer before Lord Pecus does, or will she end her investigation as a bloody spatter on the parlour floor?

I received this book from the author in exchange of an honest review. 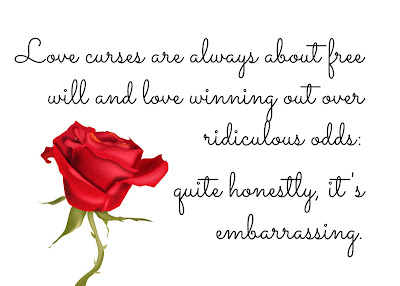 MASQUE is without doubt, a very unique retelling of Beauty and the Beast. The author has added to the story it's own creative flair, while only keeping the very basics of the original story intact. In this book we get the reclusive, formidable Lord Pecus who has been quite unfortunately cursed with a beast's face, and the incredibly mischievous Lady Isabella Farrah who has a slight problem in refraining from poking her nose into affairs that don't really concern her. Lord Pecus believes that Bella is the one to break his curse, but circumstances prove that that is easier envisioned than contrived.

The mystery aspect of the story was given more priority while the romance was just barely there- and that suited me perfectly fine. I found the wheels on my brain whirring as I tried to figure out who the killer was- and I'm proud to say my first guess turned out to be correct. No, it wasn't THAT obvious, but let's just say I'm very suspicious in nature and so I didn't fully trust that character's motives at the beginning. I still had fun waiting to see whether my guess would turn out to be correct and did a little happy jig when it proved correct.

The story is set in an imaginary land and the author did a terrific job in the world-building- perhaps a little too terrific, since it took me quite some time to really grasp it, but the narrative voice was so strong that it didn't irk me at all. There was an enchanting mix of magic in the story that made it all the more wonderful, and I can frankly say that the author's style of writing immediately clicked with me. There was a fantastic undercurrent of dry humor throughout the book that pleasantly surprised me and me fall in love with the storyteller just a bit more.

There was a host of characters throughout the book, and they were all done very well. The author managed to make me like quite a lot of them, particularly Isabella, who was a very feisty, witty character who managed to keep me enraptured until the very end.
She was one strong woman with a mind of her own. She knew exactly what she wanted- and didn't want- and wasn't afraid to speak up whenever necessary. I loved that she was not only intelligent, but also very brave and capable, and quite managed to keep her promise of "no torn petticoats, and no bruised knees" to her father. I liked that the author portrayed Bella not only as an independent woman, but also a womanly, imperfect one- something which authors tend to forget when portraying "strong" female leads. I found myself liking Lord Pecus quite a lot, but I do so wish we had got to know a bit more about his history.

The many relationships were portrayed exceptionally well in the book. I particularly loved the relationship between Isabella and her sister, Susan, who was just as mischievous as her- or even more so. It was therefore very fitting when Curran, a horselord, remarked, "Heaven help us, there's two of 'em now!" on Su's arrival. I loved how Bella treated her maid Vadim and Vadim's little brother Keenan, and it's not wrong to say that they were fellow mischief-makers after Bella's own heart! The flow of conversation, the little banters between the characters and their manner of speaking all made this book one awesome read.

The mystery in the book deserves a special mention here because of how exciting it was. I had a distinct sense of foreboding when anticipating what was to come and it was simply splendidly done- the author scored big there. Considering the length of the book and the importance given to building up the suspense, the author could have perhaps made the ending a bit more drawn out- it felt slightly too abrupt and underwhelming, but maybe that's just the dramatic side in me speaking up!

All said, I also have to mention that one thought I constantly had after reading the book was that while I personally loved the cover, maybe the author should go for one that's a bit more understated, since this one certainly doesn't do the book justice- MASQUE was one superb retelling of Beauty and the Beast which you simply MUST read if you're into those! If you have any doubts regarding this book , I daresay its dedication would be more than enough to convince you to pick it up:


“This one is for me. It was written entirely for my own selfish amusement. You can still enjoy it, though. That’s okay.”

P. S. You can check out an excerpt from the book here, or read the short story written to celebrate the rapidly approaching first birthday of MASQUE here!
Written by: Ruzaika @ Wordy & Whimsical date: 05:30