“If you admit you need people, you can lose them.' Her gaze sharpens, returning to the present. 'But needing people can save your life.” 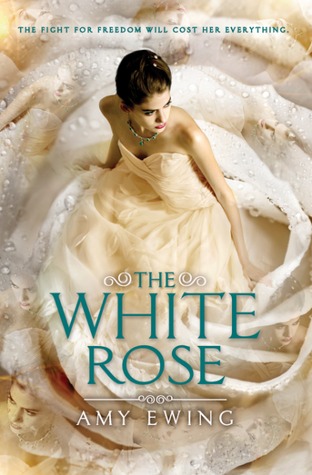 Violet is on the run. After the Duchess of the Lake catches Violet with Ash, the hired companion at the Palace of the Lake, Violet has no choice but to escape the Jewel or face certain death. So along with Ash and her best friend, Raven, Violet runs away from her unbearable life of servitude.

But no one said leaving the Jewel would be easy. As they make their way through the circles of the Lone City, Regimentals track their every move, and the trio barely manages to make it out unscathed and into the safe haven they were promised—a mysterious house in the Farm.

But there’s a rebellion brewing, and Violet has found herself in the middle of it. Alongside a new ally, Violet discovers her Auguries are much more powerful than she ever imagined. But is she strong enough to rise up against the Jewel and everything she has ever known?

My first and foremost problem with The White Rose is the blurb that straight out tells us that they all manage to escape safe and sound. I didn’t consider this a spoiler prior to realizing that they manage to get to this safe haven halfway through the book. I'm serious - basically 50% of the book is about them running away which should be very exciting if it takes up this much time, right? Well, it isn’t because we ALREADY KNOW that they’ll all get there in one piece. This escapade is spiced up with them being recognized and separated but it was hard for me to care about these things when I was sure of the outcome.

Thank god, The White Rose wasn't all bad, there were plenty of things I liked. Firstly, I’d like to point out that I wasn’t as bothered by the romance as I had been while reading The Jewel. Partly, this could be thanks to that I don’t remember every terrible part of this insta-love, but it’s mostly because I kind of like Violet and Ash together. I mean, they are not OTP material but Haymitch and I definitely approve of their relationship.

On the plus side, we had the chance to see a bit more of the world than we did in the first novel. My favorite - and most disturbing - part of the novel was getting a good look at the companions' lives. Even in The Jewel it was clear that these guys had it hard - but in this novel we truly saw just how terrible their lives were.


"They brought girls to me. Madame said I had to please them. I didn’t want to—the girls were so scared. I was scared. But you don’t go against Madame. My teachers watched. They judged and instructed me. It was humiliating. Then they sent me off to charm daughters during the day and sleep with their mothers at night. I’ve slept with women old enough to be my grandmother. All because Madame Curio saw me outside the clinic and thought I was handsome."

Knowing more about Ash's former life gave him a bit of depth - which is something that I've been missing since the beginning. However, I'm still not sold on our main characters - they still feel unrealistic and empty.

Thankfully, two of the supporting characters redeemed the story a bit. I've always liked Raven but now, after all the horrible things she went through, she's one of the most interesting characters in the novel. Her reactions and emotions feel so real - much realer than Violet's or Ash's. Same goes for Garnet, who is undoubtedly just as much of a wonderful character as Raven. AND I WANT TO SEE THEM TOGETHER!!

This series has SO MUCH potential, but at this point it's unlikely it'll ever live up to it. I like the emotional scenes, I like some of the characters, I like the want for revenge and the way the characters became a strong unit. What I don't like is how these scenes are alternated with meaningless scenes and cheesy clichés.

Oh, and the best? The book, yet again, ended with a pointless as fuck cliffhanger that was, yet again, predictable as fuck.