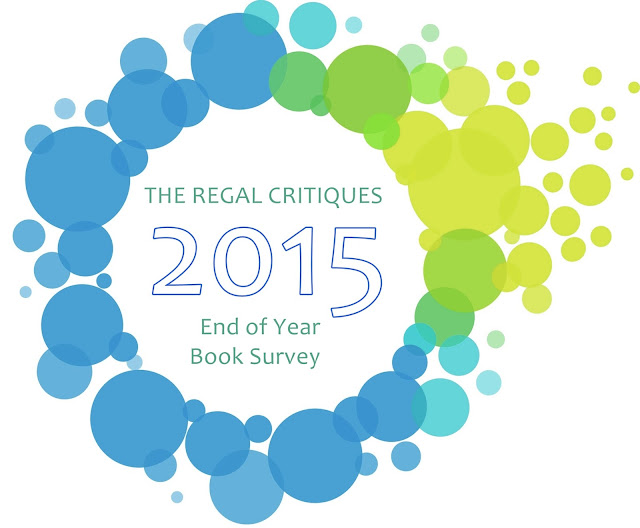 Hosted by Jamie from The Perpetual Page-turner

Hello lovelies, it's me Ruzaika here today with my End of Year Book Survey. I'm really excited to be doing this because it's obviously going to make me feel very good about myself  2015 didn't bite me in the ass quite as much as 2014 2015 has been such an exciting year for me, what with getting to know our resident bookworm, Vera, and joining her as a co-blogger of The Regal Critiques. Yeah, so 2015- you go right under my microscope!

Number Of Books You Read: As of December 28th I’ve read a total of 91 books. Doesn't sound like a lot, but I'm pretty happy with it considering I signed up for 80 on my Goodreads Reading Challenge this year, and uni has been pretty taxing too.

Number of Re-Reads: I re-read the Princess Diaries to prepare myself for Royal Wedding- so that'd be 10 this year.

Genre You Read The Most From: I'm not really sure- it's either Contemporary or Fantasy- not much of a difference in their total count I guess. Forgive me for being lazy here!

Well, that's not a very good question. I've been introduced to so MANY authors this year. Well, I'll have to go with ten of my favs:

2. Book You Were Excited About & Thought You Were Going To Love More But Didn’t?

Charlie, Presumed Dead by Anne Heltzel. I'm still in two minds about it honestly- I read so many great reviews about it and was very eager to pick it up, but it just didn't click with me. Not that it's NOT good, but IDK.

3. Most surprising (in a good way or bad way) book you read?

In a good way: Dangerous Girls by Abigail Haas- after Gone Girl, I was sure no other book would impress me, but this one did. Not as much as the previous for sure, but it still was surprisingly good for a YA Thriller.

4. Book You “Pushed” The Most People To Read (And They Did)?

Me Before You by Jojo Moyes. I recommended it to so many friends and it was so awesome when they all told me they cried after reading it *evil laughs*

That's quite a long list, I'll go with just one- Renee Ahdieh!

7. Best book from a genre you don’t typically read/was out of your comfort zone?

Dystopian- I can't believe I've spent all these past years steering away from this genre- yeah, shoot me! Marissa Meyer and Suzanne Collins deserve a pat in the back for making me enjoy this genre. The Lunar Chronicles. The Hunger Games.

8. Most action-packed/thrilling/unputdownable book of the year?

Gone Girl. I know this is not a book for everyone, but my nose was practically glued to the pages when reading it. Argh.

The Wrath and the Dawn by Renee Ahdieh, definitely.

There were so many, but The Heir by Kiera Cass really takes the cake.

Amy Dunne from Gone Girl is hands down the most awesome woman ever!

The Gift by Cecelia Ahern was really beautifully written, I loved how the author set the Christmas atmosphere perfectly.

I Love I Hate I Miss My Sister by Amélie Sarn was such an intense, thought-provoking book. More so because I could relate to it on a personal note.

The Mediator series by Meg Cabot- I'm such a huge fan of her, I don't even know why I didn't pick up this series sooner!

I honestly cannot resist sharing this:

“For several years, I had been bored. Not a whining, restless child's boredom (although I was not above that) but a dense, blanketing malaise. It seemed to me that there was nothing new to be discovered ever again. Our society was utterly, ruinously derivative (although the word derivative as a criticism is itself derivative). We were the first human beings who would never see anything for the first time. We stare at the wonders of the world, dull-eyed, underwhelmed. Mona Lisa, the Pyramids, the Empire State Building. Jungle animals on attack, ancient icebergs collapsing, volcanoes erupting. I can't recall a single amazing thing I have seen firsthand that I didn't immediately reference to a movie or TV show. A fucking commercial. You know the awful singsong of the blasé: Seeeen it. I've literally seen it all, and the worst thing, the thing that makes me want to blow my brains out, is: The secondhand experience is always better. The image is crisper, the view is keener, the camera angle and the soundtrack manipulate my emotions in a way reality can't anymore. I don't know that we are actually human at this point, those of us who are like most of us, who grew up with TV and movies and now the Internet. If we are betrayed, we know the words to say; when a loved one dies, we know the words to say. If we want to play the stud or the smart-ass or the fool, we know the words to say. We are all working from the same dog-eared script.
It's a very difficult era in which to be a person, just a real, actual person, instead of a collection of personality traits selected from an endless Automat of characters.
And if all of us are play-acting, there can be no such thing as a soul mate, because we don't have genuine souls.
It had gotten to the point where it seemed like nothing matters, because I'm not a real person and neither is anyone else.
I would have done anything to feel real again.”

That's easy, thanks to ‘My year in books’ on Goodreads.

17. Book That Shocked You The Most.

Me Before You by Jojo Moyes. Call me ignorant, but I never thought places like Diginitas even existed.

Shazi and Khalid from The Wrath and the Dawn by Renee Ahdieh. Take a bow, guys!

19. Favorite Non-Romantic Relationship Of The Year.

Iko and Cinder from The Lunar Chronicles for sure! I totally adored Iko.

20. Favorite Book You Read in 2015 From An Author You’ve Read Previously.

The Husband's Secret by Liane Moriarty- I really love the way she deals with the plot!

21. Best Book You Read In 2015 That You Read Based SOLELY On A Recommendation From Somebody Else/Peer Pressure:

The Mediator series, thanks to Vera :D I was quite sure I'd never read that series, don't even ask me why.

Khalid ibn Al-Rashid, Caliph of Khorasan (from The Wrath and the Dawn). So what if I have a thing for broken guys?

There were so many, but I think I'll go with Pretending to Be Erica by Michelle Painchaud.

I think Renee Ahdieh did a really wonderful job with the world-building in The Wrath and the Dawn- take me there already! And OMG, the food!

25. Book That Put A Smile On Your Face/Was The Most FUN To Read?

Shopaholic to the Rescue by Sophie Kinsella, I always love reading about Becky's misadventures- and LUKE BRANDON!!! Marry me already!

Me Before You by Jojo Moyes *sniffles* My heart BROKE for Will Traynor!

Between Now and Goodbye by Hannah Harvey. I picked it up solely based on my instincts and I ended up liking it quite a lot.

28. Book That Crushed Your Soul?

The Wrath and the Dawn by Renee Ahdieh. That ending. Ugh.  Why, oh, why?!!

Gone Girl by Gillian Flynn. I can't even find the words to tell you how much I loved that book. It was THE BEST.

30. Book That Made You The Most Mad (doesn’t necessarily mean you didn’t like it)?

Proof of Forever by Lexa Hillyer- the plot was totally wasted, the writing, the characters and the pacing made it one frustrating read.

There are so many, I'll just list a few of my most favorites-

There were many, but I quite loved my review of Me Before You and The Wrath and the Dawn a lot.

Non-review post, Haunted Libraries From Around the World was something I loved researching for!

This may sound terribly pretentious, but I loved Spooky October and A Christmas Story here at The Regal Critiques *dares you to say otherwise*

JOINING THE BLOGGING COMMUNITY- thank you, Vera! I wouldn't be here if not for you, like, seriously. Blogging? Me? I'm so glad you convinced me to co-blog with you. LOVE YOU!

6. Most challenging thing about blogging or your reading life this year?

Balancing reading, reviewing and uni was pretty tough, but I DID IT!

7. Most Popular Post This Year On Your Blog (whether it be by comments or views)?

*looks around sneakily* I made Vera find that out for me, LOL, and it's our discussion review of Royal Wedding by Meg Cabot! I'm so glad it has the most views because I simply LOVED gushing over that book with Vera!

I'm thankful for ALL the love you guys have shown! Love y'all!

Erm, The Regal Critiques, or rather, Reading is Dreaming With Open Eyes as we were previously called.

10.  Did you complete any reading challenges or goals that you had set for yourself at the beginning of this year?

I only ever signed up for the 2015 Goodreads Reading Challenge, and yeah, I did it.

Everything, Everything by Nicola Yoon. I kept on meaning to read it this year, but I somehow didn't end up picking it up. Next year, hopefully.

The Forbidden Wish by Jessica Khoury sounds like a really intriguing retelling of Aladdin. Looking forward to it!

4. Series Ending/A Sequel You Are Most Anticipating in 2016?

The Rose and The Dagger by Renee Ahdieh- I can't wait to see how it would all turn out to be!


5. One Thing You Hope To Accomplish Or Do In Your Reading/Blogging Life In 2016?

Read more, review more, blog hop more! I don't do enough of all these!

Nope, not so lucky :( *perking up* Maybe I'll have one for next year!

Well, guys, so that was my annual book survey for 2015. Stay tuned for Vera's post, but meanwhile, tell me what you think of my splendid 2015 in the comments below!