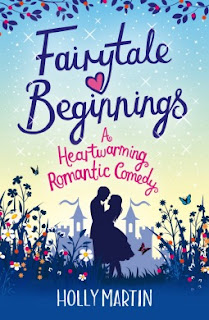 Love is an open door…except when it keeps slamming in your face.

Hopeless romantic Milly Rose has had her fair share of heartbreak. Obsessed with all things Disney, she refuses to give up on finding her Prince Charming – he’s out there somewhere, isn’t he?

When Milly is given a job to investigate the origins of an historical building in the village of Clovers Rest, she’s not sure what to expect. What she discovers takes her breath away - a beautiful real life Cinderella castle, complete with turrets, a magnificent drawbridge AND a very handsome owner…Cameron Heartstone.

As Milly and Cameron begin to unearth the secrets of Clover Castle, they can’t ignore the intense chemistry building between them. But they’ve both been hurt badly before. Can they take a big leap of faith and find their own happily-ever-after?

A Disney-obsessed MC, a real life Cinderella castle, AND a very handsome owner. You had this awesome story in your hands that you could have made into this magical, entrancing book, but you instead went for this crass excuse of a novel instead. WHY?! That really pisses me off. It actually makes me want to tear my hair off my head. How could you so ruthlessly murder such a beautiful story? How could you?! I was really frustrated seeing all this potential go waste. So yeah. I did not like how the story was executed. To be honest, I hated the characters. Why couldn't you do this story justice?

I wanted to love this book so badly. I truly wanted to, yet unfortunately, I didn't. The storyline had such potential but it all went waste. I suppose it's primarily because of the main character Milly, who seemed like a proper grown up at one moment and then seemed to change her mind halfway and went on to be an annoying child. Even though there were moments where I found myself laughing out loud, they sadly did not suffice to carry the story.

I just.. I can't understand why you had that frustrating way of dealing out those moments of positively crass humor. I don't know whether it was just me, but all those manly parts that were described as wonky had me wrinkling my nose in distaste (in case you're wondering, the said jokes were not just about our hero's said parts- spare me the torture of having to explain it to you, please). The book started out so well, but I had to draw the line when the "hero" though it was okay to be outright rude to the main character and call her names. All those revelations about his past (and Milly's, for that matter) did nothing to redeem this excruciatingly cringe-worthy novel. You should have perhaps spent more time on working out these major problems in your "heartwarming romantic comedy."