Kim Harrington - The Dead and Buried 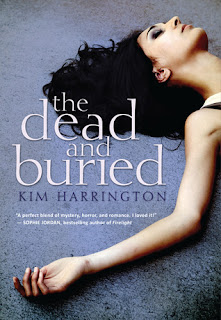 Jade loves the house she's just moved into with her family. She doesn't even mind being the new girl at the high school: It's a fresh start, and there's that one guy with the dreamy blue eyes...

Jade's little brother claims to see a glimmering girl in his room. Jade's jewelry gets moved around, as if by an invisible hand. Kids at school whisper behind her back like they know something she doesn't. Soon, Jade must face an impossible fact: that her perfect house... is haunted.

Haunted by a ghost who's seeking not just vengeance, but the truth. The ghost of a girl who ruled Jade's school - until her untimely death last year. It's up to Jade to put the pieces together before her own life is at stake. As Jade investigates the mystery, she discovers that her new friends in town have more than a few deep, dark secrets. But is one of them a murderer?

I was attracted to this book when I was on the lookout for spooky books to read this month, and I have to say I was definitely not disappointed. I wanted a book that would have the right amounts of spooky and mystery, and The Dead and Buried gave me just that!

The book started off really well with Jade moving into her new house and eventually getting to know that Kayla, a very popular girl at school who had lived in Jade's new house, had died under suspicious circumstances in the same house the previous year. Jade is understandably upset about it and the following events put her in such a place that she simply has to find out exactly how Kayla was killed.

Kim Harrington has weaved an intriguing plot with great characters and I found myself trying to guess who killed Kayla along with Jade and guessed correctly only a few pages ahead of her. The pacing felt just right and there were a few creepy moments scattered all through the book. The parts where Jade communicated with or felt the ghost's presence were truly, truly creepy! Kayla's ghost itself wasn't particularly menacing, though- which suited me just fine.

Jade was a compelling character with a really interesting hobby of collecting gemstones. It was interesting the way this contributed to the story in its own way. There were a host of side characters who each made the story more interesting. I loved Jade's brand new friend Alexa who was an adorable nerd- she was so refreshing. Two guys were interested in Jade- one, the very popular Kane, and the other is lonely, brooding Donovan, the ex-bf of Kayla. There's the perfect amount of romance, just enough so that it doesn't take over the thrill of reading a spooky book.

Kayla deserves a paragraph all to herself just because of her importance in this story. We get to know her through snippets from her diary, and my, was she mean! She was the typical queen B at school, of whom all were scared of since she could make or break a person's reputation at her will. Manipulative, evil- she was all that. Unbeknownst to others, she did have her issues, but she never shared them with anyone. She referred to people using numbers in her diary, so it made it all the more interesting to read since we had to figure out who she meant by which number. That was really cool! Anyway, that was Kayla when she was living. As a ghost, she was even more manipulative and evil. She was ready to do literally anything to discover who killed her. A real badass ghost!

Another aspect of this book that I liked was the portrayal of family relationships. Jade's mother died when she was young. Now her father is remarried and she has a stepbrother (Colby) too. I loved how Jade was ready to go to any lengths for Colby and how she always tried to put her family before anything else.

Sounds like a great read, doesn't it? What made me rate it less than five stars was that it was kind of clichéd (ouija board, glimmering ghost and the likes). I also had a little problem where I couldn't really connect with the characters even though they were greatly done.

However, The Dead and Buried has just enough of horror, mystery, romance and high school drama in it- a truly perfect combination indeed! Kim Harrington has done a great job with this novel, and I wouldn't hesitate to recommend it to anyone who's on the lookout for spooky, but not overly disturbing reads this Halloween!

Comment on this review and gain two more entries in our
Spooky October Giveaway!
Written by: Ruzaika @ Wordy & Whimsical date: 08:38