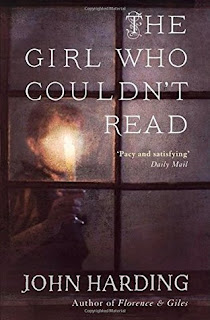 A sinister Gothic tale in the tradition of The Woman in Black and The Fall of the House of Usher.

New England, the 1890s. A man calling himself Doctor John Shepherd arrives at an isolated women’s mental hospital to begin work as assistant to the owner Dr Morgan. As Shepherd struggles to conceal his own dark secrets, he finds the asylum has plenty of its own. Who is the woman who wanders the corridors by night with murderous intent? Why does the chief nurse hate him? And why is he not allowed to visit the hospital’s top floor? Shocked by Morgan’s harsh treatment of the patients, and intrigued by one of them, Jane Dove, a strange amnesiac girl who is fascinated by books but cannot read, Shepherd embarks upon an experiment to help her. As he attempts to solve the mystery of Jane’s past his own troubled history begins to catch up with him and she becomes his only hope of escape, as he is hers. In this chilling literary thriller everyone has something to hide and no one is what he or she seems. The Girl Who Couldn't Read is the long-awaited sequel to the critically acclaimed international bestseller Florence and Giles but can also be read as a gripping standalone novel.

Are you? Then don't read this book- there's a fair amount of evil-in-the-dark kinda scenes here. I'm kidding, it wasn't so bad. You can trust me- really! I still make it a point to check under my bed before turning in for the night, but I'm quite a chicken when it comes to horror, so naturally I was pretty creeped out at the beginning, but by and by I was so interested in unraveling the mystery and finding out how the story would turn out that I didn't mind the delicious shivers this book gave me.

Set in New England, in the 1890s, we are introduced to Dr. John Shepard who arrives at an isolated women’s mental hospital to begin work as an assistant doctor. He is shocked by how the patients are treated, and so are we. As time passes, he begins to notice that things are just not quite right- who is the woman that haunts the corridors at night? Why do Doctor Morgan and Nurse O’Reilly conceal the identity of one of the patients so much so that none of the other workers seem to know about her? The young doctor needs answers, but he has to be very careful here since it turns out that he isn't a doctor after all.

In an attempt to convince Dr. Morgan that there were more humane ways of treating mentally ill patients, Shepard takes up the challenge of curing one of the patients according to the principles of Moral Treatment. For this he chooses Jane Dove, a girl suffering from amnesia. The journey of Jane Dove's recovery unearths a lot of things about her. Jane Dove wasn't her real name. She couldn't remember anything of her life before she was found at a railway station and was admitted to hospital. What she knew was that she wasn't allowed to read, but she loved books. She had a distinctive way of speaking, turning nouns into verbs and joining words in unexpectedly to make new expressions and twisting English into something strange, new and magical.

Doctor Shepard tries hard to persuade Jane Dove to read, and he tries his best to restore her memories. However much he tries to be good, he is still afraid the inhuman side of him would rear it's head. Will Shepard manage to cure Jane? Will he be able to keep the monster in him in check? Will his past catch up with him? Read the book to know it all.

"There was the patter of bare feet over floorboards and I swivelled round in time to see a wisp of white, the hem of a woman's dress or nightgown, whisk around the edge of the door, its wearer seemingly fleeing after finding me there, and pulling the door behind her with such a slam that the draught from it killed my candle dead."

This book reminded of me Jane Eyre so much that it may as well have been touted as a reimagining of Charlotte Bronte's masterpiece. Not only is there a mad woman in the attic, all the other characters seem pretty mad themselves. I loved the narrator's slightly creepy voice. Having gone through a decidedly traumatic childhood, Shepard is an unscrupulous con-artist who would go to any lengths to protect his identity. Jane Dove was a bizarrely lovable character. I loved the scenes with her, and it was only after I started this book that I came to know that this was, in fact a sequel to the author's past book, Florence and Giles. Jane Dove's connect to Florence is creepy and after reading this book, I now definitely want to check out F&G.

"Looking around the tables, I saw women snatching other people's bread and others left with nothing at all. All this Morgan viewed with such complete indifference that I began to despair of humanity.."

I definitely didn't like the sadistic O'Reilly and Dr. Morgan. The way they treated the patients was appalling and the author seems to have done a very thorough research on the ways of treatment at lunatic asylums in the 19th century. It was quite harrowing to read about and the matter-of-fact way in which Dr, Morgan carried out these procedures on the helpless patients make one thank god for the advancement in psychiatrist practices the present day.

"The attendants hauled her into [the chair], manhandling her in the face of fierce opposition on her part, got her hands strapped to the arms and then proceeded to strap her ankles to the legs in spite of her kicking feet. Finally, they placed the strap attached to the chair back around her throat. A strap like that could strangle a woman, I thought."

The story was a perfectly paced thriller that allowed the plot to grow fantastically with aptly scattered twists. The writing was clear and concise, and the author succeeded in narrating a deliciously gothic tale by building the perfect dreary, suffocating setting with well-drawn insane characters. The element of mystery was maintained at a high level and the story ultimately built up to the most perfect finale, leaving the reader feel crazy for answers. There's definitely an opening for a third book and I, for one, hope it materializes soon!


"I spun my chair around and found myself staring into the face of a woman. And what a face! Her black hair was a wild storm around her head, and her eyes were red-hot coals, as if she had come straight from Hell to drag me back there with her, a place, it has to be said, where I most certainly belonged."

Comment on this review and gain two more entries in our
Spooky October Giveaway.
Written by: Ruzaika @ Wordy & Whimsical date: 05:25