R.I.P It or Ship It Book Tag 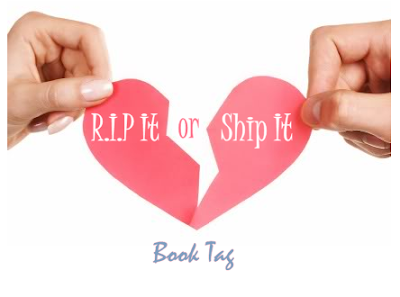 Hey guys! Today we're  doing the R.I.P. It or Ship It Book Tag. This tag was created by emmmabooks and we at The Regal Critiques decided to tag ourselves because it looked like so much fun!


For those of you who already know this- please bear with us as we go through what happens briefly, and for those of you who know head nor tail of this tag, here's what it's all about! First you put a bunch of character names in a bowl/ jar/ whatever- both male and female- and then you pull out two names. Next you decide whether you R.I.P it or ship it. Simple, huh?

So Vera and I chose 8-8 male and female character names and drew out couples for each other. We each then made the heartbreaking decision of whether we can ship them together or not. Trust me, this was very difficult for us as we do so love our ships and don't like seeing them paired up with other people, but then, it was so much fun too! Without further ado, put your hands together for..

Oh. RIP it. I love Luke too much. *ROFL* And he's way different than Skylar anyway. He needs someone bubbly and cheerful and a right little ray of sunshine because with a mother like his, he NEEDS it. Someone better than old Sky, or at least different.

This one's hard! Their names kinda fit together so that's something haha. But seriously, it's hard for me to decide - both of them are difficult to get to know. I'm gonna say RIP it, because I think they need help finding themselves and they would never be able to give each other the emotional support they need.

Ruzaika
Wes (The Truth About Forever) and Lucy (Heaven Can Wait)

Ship it!! Because Lucy is the patient, one-love kind, she'll help Wes deal with his problems and stuff. Wes is awesome himself, so I can see he'll be good for Lucy!

I wanted to say RIP it instantly but then I thought about how "weak" Draco became by the end and how it was his father who controlled him through the series, so maybe it'd work out! SHIP IT! There, I said it! I know most HP fans have a soft spot for Draco but I just really hate him.

(Well, that's a sound reasoning :P I would have said Ship it for entirely different reasons though. Draco deserves a good spanking on his butt for being such a douche *wink wink* -Ruzaika)

(That's what Charlie would need with his mental problems: a cheater. - Veronika)

Veronika
Jocelyn (On Dublin Street) and Thorne (The Lunar Chronicles)

RIP it! They'd never get together if it was up to them. Both of them need a partner who is pushy in the right way and makes them understand that they're worthy of love and are ready for a relationship. Like, Cress is this really cute, bubbly girl who brings out the best possible side of Thorne. And Braden is pushy in this possessive and bossy way that makes Joss equal parts want to kiss and kill him.

Okay, it might kind of work out. Both of them don't care when the object of their affection is seeing someone else (chuckles) and they might actually end up being good for each other. Ship it... I guess.

RIP IT OH MY GOD. Nick is such a screwed up person who would never be happy in a relationship that our society considers "normal". Not that Ruby is normal with her dangerous powers but she wants to be normal, she'd do anything not to have this ability. Ruby needs someone who accepts her and helps her forgive herself, Nick needs someone who challenges him.

Veronika
Daniel (The Shadow of the Wind) Rachelle (Crimson Bound)

RIP IT. I can't imagine 100% human Daniel with someone like Rachelle who fights and kills everyday. Daniel would never be able to understand the guilt Rachelle is feeling, thus he wouldn't be able to help her overcome it and forgive herself.

That was easy, RIP it. They are each weak in their own way and I honestly cant see any good coming out of that. In fact, Ana might end up being too much of a negative influence on Cress who needs all the emotional support she can get. And quite FRANKLY, Cress deserves better :P

RIP IT. Edie barely has any self-confidence which would NOT go over well in the palace, especially if she participated in the Selection. I think Maxon would have sent her home in one of the earlier eliminations because they don't have many things in common. Also, Edie is more the scientist type than the princess type.

(Maxon and America were the best, it positively breaks my heart thinking of him with anyone else!! - R.

You know what would have been funny - Maxon and Aspen together. Like, fuck you America, you took too much time choosing between us, we started to hang out and are getting married. *ROFL* - V.)

Oh shit. No way, RIP it. Ron wouldn't have been able to stand her nonsense and they would have such ego clashes, what with her being a princess and Ron being a Weasley and all that. Mr. Weasley would have liked the Muggle addition to the family maybe? But no, please.

(Mr Weasley sure would have liked the Muggle addition to the family... until he met Eadlyn. - V)

They could work out in a way that if Lily cared about Josh she'd have done anything to help him get through his problems. She is unstoppable. But I could imagine them more as friends than anything else. I think Josh is better off with a girlfriend who's calmer... and more like him. So RIP it.

Ruzaika
Lou (Me Before You) and Malek (Exquisite Captive)

RIP it. I can't see Lou putting up with any shit from Malek, and I don't see Malek falling for Lou ANY DAY. They are way too different, and not the different that might actually work out either. RIPRIPRIP it.

NOOOO. Never ever ever. RIP it because they're totally different and Suze would never accept that Malek wants to be in control all the time. However, I'd make them go on a date, just so Suze can punch Malek in the face. He so deserves it after the way he treated Nalia for years.


We-e-ell, so that's how the R.I.P. It or Ship It Book Tag ended for us, with both Vera and I picking the deliciously indomitable Malek Alzahabi (quite unintentionally) for each other. Anyways, we had SO MUCH fun doing this and can't wait to try it sometime again!  We will not be tagging anyone in particular but if you want to do this tag, do drop in a comment and tell us how you feel about this- and if you've done this before, we'd love to check your tag out too!