"I’m into people believing and doing whatever the hell they want as long as it doesn’t hurt other people." 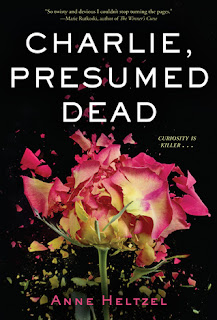 In Paris, family and friends gather to mourn the tragic passing of Charlie Price—young, handsome, charming, a world-traveler—who is presumed dead after an explosion. Authorities find only a bloodied jacket, ID’d as Charlie’s. At the funeral, two teens who are perfect strangers, Lena Whitney and Aubrey Boroughs, make another shocking discovery: they have both been dating Charlie, both think Charlie loved them and them alone, and there is a lot they didn’t know about their boyfriend. Over the next week, a mind-bending trip unfolds: first in London—then in Mumbai, Kerala, and Bangkok, the girls go in search of Charlie. Is he still alive? What did their love for him even mean? The truth is out there, but soon it becomes clear that the girls are harboring secrets of their own.

No one knows whom to trust in this thrilling tale of suspense and deception.

What would YOU do if you found out your boyfriend has been two-timing you? Pack up your bags and go all around the world probing about his insanely messed up past- even now that he's "presumed dead"? I'm guessing not, but that's exactly what Lena and Aubrey do and that's exactly what I found to be most disconcerting about this book.

I must admit that I started this book with high hopes despite the mixed reviews, the title caught my attention and the gorgeous cover helped in piquing my interest a notch higher too. The book started off with Aubrey finding herself at Charlie's funeral and stumbling upon Charlie's girlfriend, Lena. Erm, excuse me, but then what about Aubrey? The girls end up talking to each other and are understandably perplexed when they find out that the Charlie they new personally was a completely different personality to the Charlie the other girl knew. They unanimously decide to search for Charlie because no body was found after all, and SO they pack up and go jet-setting all over the world to dig up his murky past.

There were things I liked and things I didn't in Charlie, Presumed Dead. The funny thing is that they are both the same. Feeling confused? Read on.


The mystery and the build up of suspense. I'm a sucker for both, so  yes, I liked how the suspense built up at the ending and how the author dealt with the mystery. We start off with knowing so little of Charlie that we just have to keep reading to quench our thirst to know what exactly happened to make him seemingly disappear off the face of the earth.

But to actually get to that point of the story you need a healthy dose of will-power because the start was kind of slow and uneventful, and that made me feel really bored. In fact, things only turned really interesting in the final 30% of the story, so I'm sure you'd agree when I say a great deal of patience is needed to go through the story till the end.


I really liked the portrayal of the relationship between Aubrey and Lena and felt it was one of the huge pluses of the book. They had a sort of a love/hate relationship where they distrusted each other, but they bonded over the experience of being betrayed by Charlie. Theirs was a very different relationship.
However I found it hard to digest how they became so close so soon, even to the point of wandering all over the world together to unknown places within the short time they got to know each other. It just didn't sit well with me.

“People aren't born bad; they become that way. It happens through a series of bad decisions... missteps over time.”


The characters were well-portrayed and I found them really interesting- especially Charlie, but I'll refrain from saying much about him for fear of spoiling the story for you. He was incredibly messed up, I'll give him that. Lena and Aubrey were very distinct from each other, and even though I found it difficult to distinguish between them early on, later they both grew into very different characters.


What I didn't like was how stupid they were. They made the most absurd choices that I found myself almost yelling at them the way we do in bad horror movies- don't do that, oh no no no. You just DON'T go looking for your psycho "presumed dead" boyfriend all over the world on a hunch that he'd have faked his death. You don't. Or you should at least head back home when things turn sinister, which they eventually did. Turned sinister I mean.

This wasn't a typical love-triangle, so it didn't leave me groaning like they normally do. Both Lena and Aubrey had their fair share of stories, but the too-many betrayals were alarming, even if acceptable given the circumstances. The book is told through alternating points of view of Lena and Aubrey, with a few cryptic chapters in Charlie's POV. While I didn't find much to comment on Lena and Aubrey's narration, Charlie's point of view and memories helped add the much-needed dimensions to the story.

The manipulation, shockers, twists and plot were all done great, so the author should be lauded for that. The ending came as a  great big shock since I had absolutely no idea of what was to happen. It was highly ominous and left me wanting more- and that's exactly where the problem lies. It. Left. Me. Wanting. For. More. There's no sequel, and nor will there ever be. Talk about unfair! It has been confirmed that this is a stand alone thriller, so that major cliffhanger was extremely unsettling and uncalled for. I want closure.

All in all, this was quite an engaging read that succeeded in leaving me frustrated. Go for this book if you like suspense and devious plans and cliffhangers. The story-line was interesting, the characters were insane and the ending was mind-blowing- but it just didn't click with me. Maybe you'll have better luck!