"Where's the fun in anything if there's no risk?" 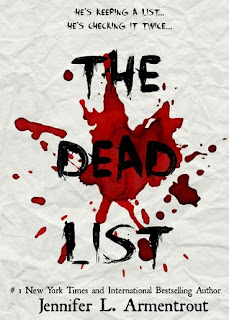 "The Dead List is a full standalone novel, coming in at roughly 93,000 words. It’s a Young Adult Romantic Suspense Yes. Lots of Romance. Sort of like Don’t Look Back, but a throwback to movies like Scream and the sort of campy fun ones. Think I Know What You Did Last Summer meets Scream. But with more romance.

That’s all I’m going to say about the book. I think a blind read is something different. A little fun.

There are no plans at this time to sell it or put it in print soon. I probably will one day, but the point of this is that it’s free for you guys.

The Dead List is a raw novel, meaning it hasn’t been through copy editing. You’ll going to see typos and some strange things. You’re actually going to see what a book of mine looks like before copy editors get their hands on it. Hopefully there are no random ‘shits’ where there is supposed to be ‘shirts’.

I will be posting a chapter or a couple of chapters at a time, as one does on Wattpad. Chapters will be added every Wednesday, Friday and then Sunday as long as I’m not traveling or, you know, acts of God clause.

First of all, Jennifer L. Armentrout- You rock!! THANK YOU for posting this creeptastic freebie for your fans! This book was so freaking mind-blowing. It normally takes me quite some time to get involved in a story and get used to the characters, but this book had me hooked from the word Jensen go. The way JLA dealt out a perfect blend of romance and suspense in the most compelling way is truly worth lauding.

Ella, Penn, Gavin and Jensen are inseparable childhood best friends who fall apart when Penn unexpectedly dies. Jensen moves away and even though Gavin and Ella are still close, nothing is the way it used to be. Ella is now in her senior year at high school and is determined to take the maximum fun out of it along with her best friend Lindsey.

Things start turning out to be not-so-awesome when she gets attacked on her way back after a party by someone in a clown mask. As much as Ella tries to move on from this incident, her tormentor is adamant on making her life a living hell. In comes Jensen- and HOLY HOT TAMALE!!!

"My body locked up at the sound of his voice, and my gaze started at the tan hiking boots and traveled up denim clad thighs, over an old screen t-shirt that clung to abs and then a broad chest and shoulders. I forced my eyes all the way up, and they met pale blue ones. Jensen."

He certainly stole the show. While it certainly doesn't help that Ella fell for Jensen years ago and he broke her heart, it is with Jensen's help that she finds herself being able carry on her normal life in spite of the attacker's increasingly horrifying and frequent attacks.


As much as Ella wants to put her past behind her, she can't shake off the feeling that it all somehow connects to it- to Penn. What is the motive behind the attacker's actions? Does it all link up to her past or doesn't it? What happened to Penn four years ago- and what caused Jensen to move away?  All these questions came up with great rapidity, making me desperate to know the truth behind it all.

The author did a great job with the character-building. Ella was a strong character even in the face of all that horror in her life. I found myself being able to connect with her, and she was likable enough. Jensen was truly amazing (Can I have him for my birthday already?). Not too perfect, oozing sexiness and so charming, he was always there for Ella. The chemistry between them was excellent and they certainly lived up to my expectations as a couple. I loved how Jensen was so protective of Ella, but she saved herself most of the time anyway.

"I want to be that guy-the one that when your phone rings you hope it's me. The one who holds your hand in the hallway and at lunch, and the guy who gets to hold you. I want to be yours."

*Sigh* All other characters were given enough space and importance. Penn was portrayed exceptionally well and my heart broke for him. His was such a realistic character and sure to leave an impact on the reader. Gavin, Linds and Heidi were important characters and each satisfied me in their own way.

The book always kept me guessing about what was next to come and who was behind the mask. I'd have bet my money on one of the characters when something would happen to put another in the spotlight. Everyone was a suspect and it frustrated me to no ends when I was proven wrong from time to time. Towards the end though I began to speculate on one particular character and it did turn out to be right- but even that had an unexpected twist in it that I never saw coming.

Overall this book was a terrific thriller filled with mystery and suspense at every turn. The ending was extremely satisfying and my only woe is that this book is a stand-alone. I'd definitely love to read more about Jensen and Ella!

Considering that you're not Nancy Drew, and I'm not one of the Hardy Boys, I'm not sure exactly what we can do.

Everyone talks about women needing 'girl power,' as if that's something we're just born with. I mean, really, what is girl power? A pill or a drink we can take? Having a ton of female friends? Playing sports? Knowing how to kick box coming out of the uterus? Being incredibly wise or a general smart-ass?

There are people who kill for the thrill of it- thrill killers. There's no rhyme or reason why.

I want to be everything.