Amélie Sarn - I Love I Hate I Miss My Sister 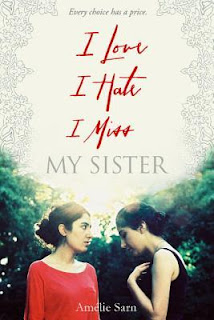 Sohane loves no one more than her beautiful, carefree younger sister, Djelila. And she hates no one as much. They used to share everything. But now, Djelila is spending more time with her friends, partying, and hanging out with boys, while Sohane is becoming more religious.

When Sohane starts wearing a head scarf, her school threatens to expel her. Meanwhile, Djelila is harassed by neighborhood bullies for not being Muslim enough. Sohane can’t help thinking that Djelila deserves what she gets. But she never could have imagined just how far things would go. . .

This book just left me feeling speechless. On reading the synopsis I expected a typical conflicted-sister relationship but nothing could have prepared me for the intensity the author carried throughout the book with perfect ease. It was chilling. It was unbelievable. Yet it was based on a TRUE STORY. Well, damn.
Sohane is a typical eighteen-year-old. She loves no one as much as she loves her care-free, gorgeous little sister Djelila- and she hates no one as much. Even though they both grew up together, Sohane can't help but feel Djelila turning into someone different and it frustrates her that she can't stop this.

"I just want to be me. I don't want to be ashamed of being Muslim and of practicing my religion. I'd like people to accept that. I don't intend to harm anyone."


While Sohane accepts being Muslim, along with all that it entails- including the head cover, her sister wants to be free of this. All Djelila wants is to live life the way she wants. But this is easier said than done because neighborhood kids who had taken it upon themselves to be the "religious police" start to harass her for not dressing modestly enough.

Sohane (understandably) feels a bit of Schadenfreude when she first gets to know this, but pretty soon understands the extent to which this problem has grown when the wannabe gangsters attempt to physically harm Djelila. What follows next is the journey of each girl towards self-discovery, and the price they have to pay for being true to themselves.

"We dreamt of a life that we would build, a life in which no one would step on our feet, in which we would walk with our heads raised. The world had better watch out!"

Things I disliked? Well, the book was too short for my liking!! But honestly, even that is understandable considering the nature of the plot. The author could have perhaps elaborated on the religious issues- but it definitely wouldn't have struck a chord with a majority of the audience.

So, all things considered, this was gem of a book, conveying a harrowing and intense story infused with some really powerful moments.


"Most journalists talk about what they do not know, about matters they don’t take the trouble to understand. They adopt the clichés that suit them—take one aspect of an issue until it becomes a caricature. To them, being a Muslim man means wanting to enslave women, to deny them any rights. I can’t say that this isn’t reality. But it’s only one reality among many—the one that is best known since it’s the one that gets the most media coverage. All I need is to be in sync with my beliefs and religion, even if that seems ridiculous to other girls my age. It's true that I've never gone out with a boy. So what? I have lots of other things to think about for now. Besides, love seems too important to last only three days or even two months. Or does being a teenager mean you have to be frivolous? Should your main interest be the color of your eye shadow, or the clothes you wear? Should whether my thong shows above my jeans be my sole concern? What a fascinating debate, right?"

A must-read for fans of realistic fiction that that punches one in the gut.