Trish Doller - The Devil You Know

"Promises are easy to believe in the middle of the night when it's dark and it's just us." 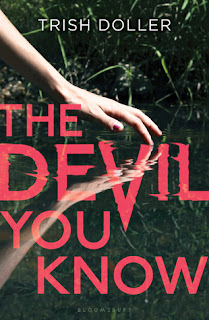 Eighteen-year-old Arcadia wants adventure. Living in a tiny Florida town with her dad and four-year-old brother, Cadie spends most of her time working, going to school, and taking care of her family. So when she meets two handsome cousins at a campfire party, she finally has a chance for fun. They invite her and friend to join them on a road trip, and it's just the risk she's been craving-the opportunity to escape. But what starts out as a fun, sexy journey quickly becomes dangerous when she discovers that one of them is not at all who he claims to be. One of them has deadly intentions.

A road trip fling turns terrifying in this
contemporary story that will keep readers on the edge of their seats.

As soon as I first laid my eyes on this book, I knew I just HAD to read it- Why wouldn't I? The cover is so intriguing, the synopsis promised delicious shivers, plus I had heard great things about Trish Doller. Even though I couldn't help feeling a sense of déjà vu when I started reading the book, the multiple twists and its creep factor kept me going.

Arcadia Wells has had to give up pretty much everything since her mother died, leaving her to shoulder almost all the household responsibilities. Juggling between high school, household chores, working at her dad's store and taking care of her younger brother, Cadie is weary of her monotonous life. So when a potential adventure rears its head, it is only understandable when she shrugs off her doubts and goes ahead with it. What is NOT acceptable are the obviously stupid decisions she takes. Want to know a few? Check these out:
Well, I could go on, but the list is endless. Nevertheless, Cadie was a likable character and she had her moments when she voiced her opinions wherever needed. She was smart, strong and had a good head on her shoulders.

Matt and Noah were portrayed as two extremely swoon-worthy guys- but the author failed to create a lasting impression here. The insta-love was a bit off-putting and the romance wasn't quite on the money.


"Matt.  I like his name.  I like the bony bump of his wrist below his brown leather watchband.  I like the barely-there sun freckles trailing across the bridge of his nose. His dark hair curls out every which way from the bottom edge of his Red Sox ball cap. If he took it off, there'd be an indentation in his hair, and I'm pretty sure I'd like that too. But the sum of the parts is almost too much for me to handle. He's so well made.. and my brain just dries up."

Wow! That was hot. It was at times like this that I couldn't help but let my mind wander away. The author could have certainly done a better job in her writing. The same goes for descriptions about Noah, but I'd let you find that out for yourself. Yes- I would still recommend this book to you if only for the numerous spine-chilling moments it definitely gave me.

Even though the book was off to a slow start, it gained momentum towards the middle (and slowed again at the end).  And yes, the plot did become quite evident at the final stages but yet the book kept me turning the pages if only to confirm my suspicions. Go for this book if you're on the look-out for a tightly-written, fast-paced thriller- and kudos to Trish Doller on providing us with a chilling summer read with the biggest creep factor.

The stroke of midnight, when the veil between worlds is thin enough for the devil to send a message.

Pretty sure I'm capable of choosing for myself, instead of waiting for you guys to decide who gets me.

I might be able to forgive Noah’s past, but not respecting my right to say no is a deal breaker.

Sociopathy isn't an affliction, Cadie. It's a gift. *evil chuckle*