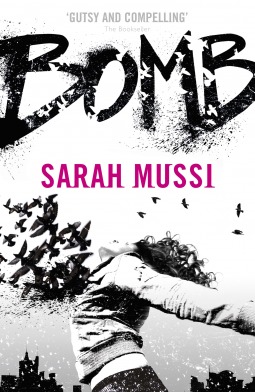 My head's ringing. And I'm cold, lying here on my back. And stiff. I can't seem to sit up. And something's dripping, like I'm in a cavern. There's a sour taste in my mouth.
I raise my head and open my eyes. A blinding flash slices, like white fire, through the edge of my vision.
Where am I?
'Hello? Anyone there?'

When Genesis goes on a blind internet date, she just wants to get over her ex-boyfriend Naz. Just wants someone to like her again. But when Genesis wakes up the morning after the date, she can't remember a thing. She doesn't know where she is, or how she got there. And she can hardly move because she is strapped into some kind of body armour ... and there's some sort of earpiece stuck in her ear.

And then a voice sounds in her head: 'You have been chosen for an assignment ... The vest you're wearing is packed with high explosives. And with one mobile call we can detonate it.'

To her horror, Genesis has become an agent of mass destruction. The countdown to detonation begins NOW...

I received a free ebook through Netgalley.

You have no idea how excited I was for Bomb. I have to admit I had huge expectations, but can you blame me? The cover is gorgeous and the synopsis makes the novel sound like an action packed, edge of your seat novel that you will not be able to put down. You have to understand that before starting Bomb I was mentally picturing this book on my "favorite hidden-gems shelf", right along with fantastic novels, such as You Are Mine or James Games. So this was a huge disappointment for me, which might not make me the best person to review it. Here comes nothing.

Most of my problems come back to Genesis, our main character. Being a thriller and action book, Bomb didn't really have any room left for character development, which would have been fine if I only had the chance to get to know something, anything about Genesis in the first place. By the end of the book I still didn't know who she really was, and that is something that bothers me. Another problem is that she is one of the most annoying characters ever, and as a narrator she sucks even more. I don't think I'm the only one who found it bothersome that we never learnt why she broke up with her other ex, the guy she went out before Naz, who happened to have a bigger role in the novel, being the person who helps Genesis.

The writing style is yet another thing I just couldn't stand. Even if we don't count the fact that Genesis sounds like an adult who desperately wants to sound like a teenager  (the way she overuses "totally" was plainly horrible) there is still the formatting of the text. I'm pretty sure the author thought that WRITING IN CAPS, or in italic, maybe in bold will make the readers pay super-close attention to everything that was happening. It did not. I like when a little formatting is used, but in Bomb it was way way too much. Most of the time I couldn't even figure out why Mussi thought it was a great idea to use formatting.

It usually really annoys me when people instead of asking for help from the police go ahead and make stupid, reckless decisions on their own. But alright, I understand that Genesis is really young and kind of dumb as well, so she obviously doesn't go to the only place where they might actually be able to save her. At least in a normal world. But in this universum the police start to shoot at her. At a person with a BOMB! Who does that? Seriously, I feel like this novel makes teenagers, police officers and everyone else in between look stupid as hell.

Why do I give two stars after such a negative review? Because I like the idea. I liked some parts, the only problem was that Genesis was always there to ruin these parts for me. I think if someone doesn't find the things I mentioned above bothersome he might actually love Bomb.