"Sometimes you get an image of someone stuck in your head and then you can't let go of it, even after they show you they've changed. All you can see is that one side of them." 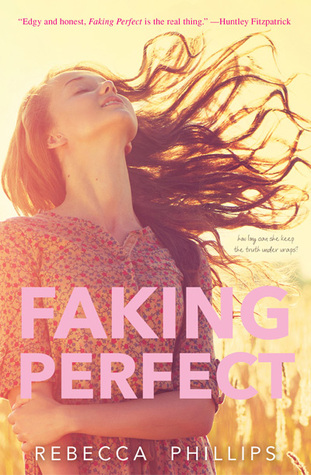 1. Avoid her at school.
2. Keep his mouth shut about what they do together.
3. Never tease her about her friend (and unrequited crush) Ben.

Because with his integrity and values and golden boy looks, Ben can never find out about what she’s been doing behind closed doors with Tyler. Or that her mom’s too busy drinking and chasing losers to pay the bills. Or that Lexi’s dad hasn’t been a part of her life for the last thirteen years. But with Tyler suddenly breaking the rules, Ben asking her out, and her dad back in the picture, how long will she be able to go on faking perfect?

I received this book in exchange of an honest review.

At first I thought I'll totally love Lexi. I'm pretty sure I'm not alone in that I've felt like I had to pretend to be somewhat different to fit into certain circles. My problem is that Lexi went way farther than I've ever imagined possible. She invented a whole other person for her popular and smart friends. With them she was cool, controlled and just simply perfect. She calculated every move she made, every word she spoke, and for what? For people who felt it necessary to make others feel small and somewhat lower than them. Umm... excuse me but I don't think you should call someone perfect who constantly looks down on others, including your best friend.

Nolan was the sweetest best friend anyone could ask for. He knew the real Lexi and accepted her with all her faults, including her desire to be friends with the people who treated him like garbage. He was loyal and supporting and a lot of other things I want you guys to find out for yourselves because the real magic of Nolan was that he always showed something new to love about him. First I didn't pick up on it, but after a time it became obvious that while Lexi fought hard for her other friends, she took Nolan for granted. Somewhere along the way she forgot to be grateful for Nolan and his family, who treated Lexi like one of their own. Worse than this Lexi planned her life around Ben, Emily and Shelby and that included her time with Nolan as well. At some parts it seemed to me that she hung out with him when she didn't have any programs with her popular friends. Kudos to the author for making a picture perfect friend here without him feeling unrealistic or over the top.

The romance was very underwhelming. I fully understand that the most important part of Faking Perfect was Lexi's self-discovery but throughout the novel she pined over either Ben or Tyler. I think after this the reader deserves a well-made romance. I'm not spoiling anything by saying that Tyler and Lexi had great chemistry, but the problem is that besides that they had nothing - at least nothing we've had the chance to read about. It was hinted that they talked some before Faking Perfect started, but can the author really expect us to buy a romance without one meaningful scene? I must add -  a romance that turned out life-changing for Tyler and helped Lexi through the hardest times. I think not. By the end I still didn't know anything about Tyler besides that he sort of "grew up" because he stopped selling drugs and didn't drink and drive together anymore. Woah, what a development!

There's no better example of a guy who reeks of bullshit than Ben. He was said to be this perfect boy but at the same time all his exes hated him. Now, if that's not a bad sign, I don't know what is. I don't understand how neither one of his previous girlfriends made a bigger deal out of what a controlling and condescending asshole Ben is. In a high-school I'd expect rumours to fly about Ben being not at all perfect, but were they? No.


"There were two sides to everything and everyone, and somewhere in the middle was the truth."

Lexi and Ben's relationship was the most disturbing and disgusting part of the novel. It was obvious from the start that they'll be together at some point but I was expecting Lexi to speak up, and for once, make Ben feel like dirt. Instead she let Ben take complete control over her life. She stopped drinking because it bothered Ben, she didn't have any fun at parties because Ben didn't like it when she left his side. But worst of all she stopped talking to Nolan because Ben's never liked him. Lexi knew that this was not normal and not at all healthy but she went along with it. What kind of example is this?

The novel is awfully predictable and is full of clichés - for instance Lexi's parents. However, I loved the writing in general. It was very light which made Faking Perfect easy to read, even at the parts where I was super-mad at the characters. I was a bit disappointed, however, because some things - such as, Shelby's boyfriend - didn't get the attention I thought they deserved.

All considered I enjoyed Faking Perfect quite a lot. The last couple of pages more than the rest of the novel, which is kind of a disappointment, but still something. The book had a very important message, but I felt like the author didn't delve on that long enough. This might just be me, though, but I love when such an important message is straight out said by the characters. I'd have loved if Lexi mentioned that being herself gave her a lot more than pretending to be "perfect" ever did. I closed the novel with wondering if Lexi would be able to be herself when she's away for university. I guess, we'll never know.