Claudia Carroll - If This is Paradise, I Want My Money Back

"Girls are like tea, you don't know how strong they are until they get into hot water." 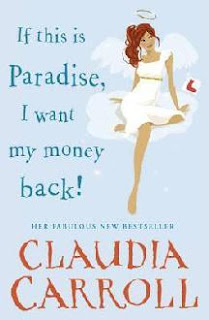 Charlotte Grey is hovering between life and death, but the weird thing is, it's taken a coma for her to finally open her eyes and see things clearly. Namely that she's made a complete mess of her short time on Earth, and don't even get her started on the five precious dating years she's just wasted on the worthless, faithless James Kane.
But after a quick peek at the afterlife, she decides that it's not all it's cracked up to be either. Kind of like a big retirement home in the sky, with an awful lot of bingo and bridge and absolutely no sign of Elvis/Princess Di/Kurt Cobain or anyone it would actually be nice to spend eternity with. So when Charlotte is offered a chance to go back to Earth, this time as a bonafide angel, she jumps at it.

But there's a catch. The person she's assigned to watch over is . . . a certain James Kane. Which is where the fun really starts. Well, just because she's passed on doesn't necessarily mean she's moved on, does it?

I’ve always loved Claudia Carroll’s works on account of her extremely down-to-earth style of writing and the serious subjects she chooses to write about in an exceptionally amusing way. This looked liked tons of fun- who wouldn’t want revenge, sweet revenge, on an ex-boyfriend? What promised me a fun read was the protagonist, Charlotte Grey who is on the brink of death, and gets to see what the afterlife has in store for her.


I expected a lot more when I first delved into the story though. The synopsis, as in many other books, sort of spoils what could have been many surprises for the reader, but nevertheless the story line did have a slightly serious undertone when it came to Charlotte’s relationship with her mother and sister. Charlotte herself was a total riot. Waking up to find herself in a coma, she is all ready for a serene, well-deserved rest. Oh, but no.. It looks like everyone she knows is very determined to bring her back by yakking away to her in the hope that she can hear them. Hear them she can, but then comes the ex-boyfriend (James), talking to Sophie-bloody-Kelly over the phone. Wait. He LOVES her? This doesn’t bother Charlotte one bit- she only goes into a cardiac arrest, and next thing she knows, she’s with her father. This could have been a lovely little re-union, except for the fact that her father died ten years ago. So does that mean she’s dead too? What happens next is for you to read and find out.

I felt the author could have made this whole ordeal a bit shorter. One of the highlights of the book was the many tricks Charlotte plays to get back at James. He deserved her crazy antics and made me laugh out loud in more than one instance. But while this is really fun to read about, not to mention oddly satisfying, I do think she went a tad too far. Her interventions in Fiona’s life, though well-intended, were particularly exasperating. Apart from these few things that tested my patience, I found that I liked this book just as much as I did Carroll’s other works.

I really liked how Charlotte didn’t spend a lot of time wallowing in self-pity and her growth into a strong character was pretty fulfilling. Even though the ending was predictable and it’s highly unlikely that I’d read it again, the book was nonetheless very engaging and kept me turning the pages. You should definitely go for it if you’re on the lookout for a lighthearted, hilarious chick-lit to kill your time. I daresay YOU wouldn’t want your money back!