Feel, but never ever love. 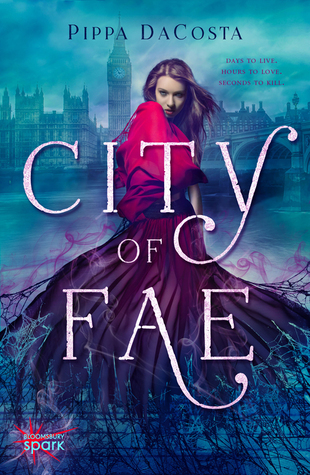 From the moment Alina touches London's hottest fae superstar, breaking one of the laws founded to protect all of her kind, her fate – and the fae – close in.

Below ground, the fae High Queen plots to claim the city as her own and places her pawns, ready for the battle to come. A battle she cannot lose, but for one small problem – Alina. There are four ancient keepers powerful enough to keep the queen in her prison. Three are dead. One remains … And to fight back, Alina risks sacrificing everything she has come to love.

This New Adult urban fantasy is packed with action and suspense and will have you yearning for more forbidden fae romance.

I was given an ARC through Netgalley


City of Fae started off perfectly. It was nowhere near perfect, not even in the beginning, I was able to get invested in the story instantly which is a huge thing. The fairies Pippa DaCosta brought to life fascinated me. Moreover, I was nicely surprised because despite my doubts both main characters seemed great at first sight. When a bit of mystery was thrown into the book I was happier than ever and couldn't wait to see more. Unfortunately, something went very wrong. In this case it was the romance - which was the very thing I was the most excited for - that crashed the, at first awesome, plot for me.

I expected mindblowing chemistry between Alina and Reign but I didn't exactly get what I signed up for. Instead of a hot and awesome relationship I got a very insta-lovey and boring romance. Alina and Reign had terrible problems, some that might never let them to be together, but the author still thought it's an amazing idea to get a second love interest in the story. Well, I didn't agree and this is where my problems start. I honestly don't understand why most authors feel like they have to put a love triangle in every single novel. Sometimes it's just not necessary at all and it only takes away from the story.

It really bothered me that besides the two protagonists I felt like everyone else was either appearing out of the blue or dying without a warning. Because of this the story felt rushed and badly structured, more than that I felt distanced from the supporting characters. What was worse was the lack of development, even the protagonists didn't go through any big changes. I get that there was not a lot of space for such things as character development, but I still missed it.

Alina could have been really badass and awesome and she was at first but, like with the rest of the novel, something went wrong with her character. When things got tough and she was feeling so many different and confusing things the author failed to convey Alina's conflicted feelings to the reader, thus I lost all connection with her. Reign seemed like a total bad boy cliché at first but then his character became sort of controversial, which made it hard for me to figure out who the real Reign is. Like Alina, he had his great moments but he can't go anywhere near my favorite characters.

Overall, City of Fae is a thoroughly enjoyable book but it could definitely use some polishing.