“If good men pretend to be villains, how is anybody supposed to know the difference between them?” 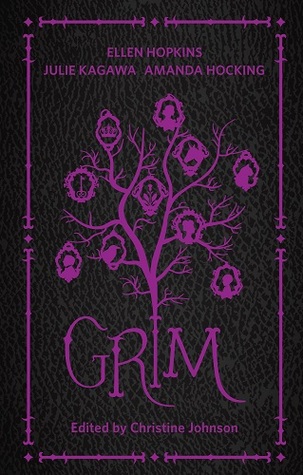 Inspired by classic fairy tales, but with a dark and sinister twist, Grim contains short stories from some of the best voices in young adult literature today:

The Key by Rachel Hawkins:

I honestly don't know what to think about this story. On one hand it was kinda enjoyable but on the other hand it was awfully predictable which made it quite boring. To be honest I don't think it was a good short-story material in the first place, it felt like a sketch of a scene from a novel. Overall, The Key did not convince me to pick up anything else by Rachel Hawkins after the disaster Rebel Belle was.
2.5/5

Definitely a unique and very unexpected story. It was enjoyable but kind of creeped me out too, not that it was frightening, rather strange. I liked it better than the first one so that is something but it still isn't a story that I'd recommend to anyone.
3/5

The Twelfth Girl by Malinda Lo

I really liked this one! Unlike the first two stories I've already known the original tale which was The Twelve Dancing Princesses. Lo re-created the story with a unique, dark twist that changed my view of the original tale. Loved the open ending.
4.5/5

The Raven Princess by Jon Skrovon

To be honest this was nearly the same as the original story (The Raven) which was a huge bummer for me because we were promised darker twists. I liked how the author changed the ending, it was a lot more "realistic" than the Grim tale but I still couldn't fully enjoy it.
3/5

Thinner Than Water by Saundra Mitchell

I have never read the original tale but this was one disturbing story. And I loved it. It was about a king whose wife made him promise before she died, that he would not marry until he found a woman even more beautiful than she had been. Sickly, he didn't find anyone quite as gorgeous until his daughter grew up. Now continue the story...
5/5

Before the Rose Bloomed by Ellen Hopkins

I rarely enjoy poetry, so it's no surprise that I was barely able to make it through this novella. Anyhow, I'm sure  people who like this genre and/or this author will find this story good.
1/5

The Brothers Piggett by Julie Kagawa

This was a really dark retelling of the original tale so obviously I loved it. The twist wasn't surprising but it was still one of the better stories in this anthology. Kagawa didn't convince me to pick up more books by her but she created an enjoyable novella here.
4/5

My favorite story from the anthology. I'm not sure about the original tale, for all I know it might be exactly the same, but one thing's for sure: Sonia Gensler surprised me big time. Loved the twist in the end, I'm sure most people will not suspect anything.
5/5

The sci-fi setting was awesome, and came at the best time. After all the dark, fantasy setting it was like a breath of fresh air. It helped too that the story was really good. Not surprising by far but I could've even imagined a whole book about this topic. Or at least a longer story, not that it wasn't perfect this way too.
5/5

Light It Up by Kimberly Derting

Here I was thinking Hansel and Gretel can't be told creatively and then I read Light It Up. Such an interesting twist of the original tale, loved the modern day settings and the realistic characters. Also, the ending was flippin perfect. I guess, Hans and Greta learnt their lessons here too, just not the same as in the original tale. *shrugs*
4.5/5

Sharper than a Serpent's Tongue by Christine Johnson

Quite enjoyable read, though not the best from the collection. Interesting question: which sister really is the cursed one?
3.5/5

A Real Boy by Claudia Gray

This is yet another favorite of mine from the anthology. Again, the sci-fi, future settings give me a break from the dark fantasies which I was unbelievably thankful for. I can't really say much without spoiling it for you but this definitely was the loveliest story from the anthology.
5/5

This story barely made any sense to me. It was about a band (I think a rock band), which members interpreted fun as taking women home and skinning them alive. *awkward silence* I have no idea what story this might be, none at all, but if the original one is anything like this, I totally understand why it isn't better known.
2/5

Beauty and the Chad by Sarah Rees Brennan

I don't know what to make of this story. It is a Beauty and the Beast retelling, that certainly wasn't made to be taken seriously, which is nice because after Skin Trade the reader might be in the need of a light tale. It was cute, though the slang might be annoying to some.
3.5/5

The Pink by Amanda Hocking

Another story I haven't read before. This was about a prince who gets kidnapped for his ability to get whatever he wishes for. In his loneliness he wishes for a girl best friend, and they fall in love. To me it was kind of strange that he created the girl, but whatever it was enjoyable.
3/5

Sell Out by Jackson Pierce

This was an interesting modern day retelling of Snow White. It was from the prince's perspective who was one of the few people who could awaken the dead with a kiss. A nice story, but I think one of the stories I gave 5 or 4 stars to would have given us a better closure.
3/5


I did a little maths (meaning, my phone did) and the aggregated result is 3,6 but I just can't give this book more than 3 stars. Mainly because the last four stories, the ones that I remember the most, were not exactly the best of the anthology. It is still recommended for anyone who likes dark short stories, though if you really are looking for dark, scary tales, lower your expectations.