Nalini Singh - Mine to Possess (Psy-Changeling #4) 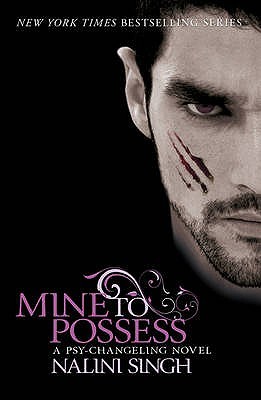 Clay Bennett is a powerful DarkRiver sentinel, but he grew up in the slums with his human mother, never knowing his changeling father. As a young boy without the bonds of Pack, he tried to stifle his animal nature. He failed...and committed the most extreme act of violence, killing a man and losing his best friend, Talin, in the bloody aftermath. Everything good in him died the day he was told that she, too, was dead.
Talin McKade barely survived a childhood drenched in bloodshed and terror. Now a new nightmare is stalking her life--the street children she works to protect are disappearing and turning up dead. Determined to keep them safe, she unlocks the darkest secret in her heart and returns to ask the help of the strongest man she knows...


Clay lost Talin once. He will not let her go again, his hunger to possess her, a clawing need born of the leopard within. As they race to save the innocent, Clay and Talin must face the violent truths of their past...or lose everything that ever mattered.

Mine to Possess wasn't as good as Caressed by Ice (who could measure up to Judd?) but it never failed to make me feel. I love that Nalini Singh can write just about anything and make you feel every single thing that happens to her wondefully written characters while I never felt like there was too much drama going on.

As always the main plot of the book was the romance but just like in the previous novels, there was a mystery and again a chance to get a better view into the psy politics and into those heads who are are in leading positions in the psy world.

The love story was a bit different from the three previous books because the two characters have already known each other from their childhood. Back then they were inseparable but after something horrific happened they got separated and lived very different lives.
I wouldn't actually say this was an insta-love because of the reason above but it wasn't slowly developed either, soon after re-meeting they developed deep feelings for each other. It didn't bother me because their connection felt real, more so because of their childhood when they were best friends and tried to protect each other all the time.

They were such a cute couple! I loved them together even if I had problems with the romance, their scenes were perfect.


“Clay, if anyone followed anyone, it was me tagging along after you. I didn’t dare order you around.”
“Load of shit,” he muttered, but she thought she heard a softening in his tone. “You fucking made me attend tea parties.”She remembered his threat before the first one: “Tell anyone and I’ll eat you and use your bones as toothpicks.”

The (fake)fear of one of the main characters death was there just like in book 1 and 3. In book 1 and 3 it was kind of necessary but right now it's starting to get old. Other than this I didn't have any problems with the book besides that I wasn't able to love the two main characters.

Again the mystery was good, maybe even better than I'd think of a paranormal romance novel. I love the psy politics and I'm really looking forward to the fifth instalment because I adore Dorian and I miss reading about a psy protagonist, reading about them fighting the silence protocol is more entertaining than reading about Talin's self-pity.

Talin: I have no right to judge her because she had a hard life and most people got it easy compared to her but unfortunately there are a few things in her that I can't just look away from. How much she was afraid of Clay was beyond me, she wasn't this afraid from those who actually hurt her but when she first saw Clay after so many years her first thought was to run. Really? He was the one who protected her through everything and if she feared him this much I'm more than sure it wouldn't have gone away in a few days just because they spent time together.

She was worried about "her" children (she referred to them like this all the time and it was more than annoying) but there were times when she completely forgot about them and now I'm not even talking about the hot scenes between her and Clay. Clay would have done everything for her, he was extremely jealous of Max and I could go on and on and still couldn't list all the things that clearly showed his affection toward Talin, but Tally questioned his reasons for helping her all the time.

She got a real family where not just the parent but the children accepted her as well, she got professional help for her mental problems and she was able to do what she wanted thanks to a scholarship, excuse me but considering these things she had no right to be as confused and hurt as she was. It's horrible what those people did to her but she got all the help a person could desire for.

Clay: I don't remember him from the other books at all so reading about him was completely new to me. I liked him but he didn't became my favorite male protagonist from this series (again remember Judd) by far. I can't even say anything about him besides how overprotective he was and how patient he was with Talin.

I love the characters from the previous books, I adore Sascha, she's such a sweetheart and I absolutely love Brenna and Judd together, I couldn't say the same about Faith though, I didn't really liked her before but in this one she acted like a jealous girlfriend which I know she wasn't. I think she crossed the border of friendship by trying to make Talin feel bad because Clay's future hadn't changed, yep this was young Talin's fault, but the girl who was there felt really bad because of how she made Clay miserable.