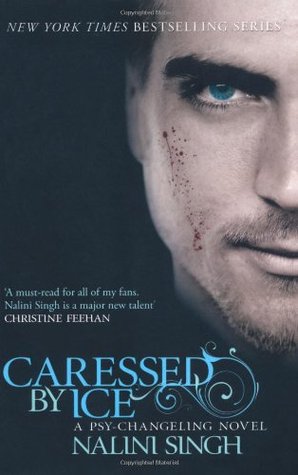 As an Arrow, an elite soldier in the Psy Council ranks, Judd Lauren was forced to do terrible things in the name of his people. Now a defector, his dark abilities have made him the most deadly of assassins - cold, pitiless, unfeeling. Until he meets Brenna . . .

Brenna Shane Kincaid was an innocent before she was abducted - and had her mind violated - by a serial killer. Her sense of evil runs so deep, she fears she could become a killer herself. Then the first dead body is found, victim of a familiar madness. Judd is her only hope, yet her sensual changeling side rebels against the inhuman chill of his personality, even as desire explodes between them. Shocking and raw, their passion is a danger that threatens not only their hearts, but their very lives . . .

I read this book more than a year ago and loved it to the moon and back, the characters were wonderful and you know how much I love these type of series wherein every book features a different couple but we have a chance to see into the lives of the previous protagonists. What made me review this book after that many time was talking to one of my friends about it, it was after midnight but I couldn't stop myself from rereading Caressed by Ice so of course I stayed up waaay past my bed time. Anyways, I loved every minute of reading this book, no matter if it was for the first time or for the second time and I'm more than sure Caressed by Ice wouldn't fail to impress me for the third time either.

In the first two books of the Psy-Changeling Series we saw Lucas then Vaughn fell in love with Sasha and Faith thus they are mated. I remember being extremely excited for this book and no, not just because it is Judd's (YAY!) and Brenna's story but because I've been waiting to see in what things the SnowDancer pack is different from the DarkRiver. Plus, in the first two novels the girls were the psys but in Caressed by Ice the guy was.

In my opinion, these kind of books can get really boring after a time because even if I like the idea of characters finding love one by one, without a real plot this kind of story just can't stand its ground. Fortunately, I still adore this series, first of all there's a real story-line behind all, political questions, corrupt people, murderers and victims and secondly because so far Nalini Singh has been able to make every book a bit different.

Now, let's talk about Caressed by Ice. As I said it was pretty different from the previous books, here Brenna - a wolf girl who was the only survivor of Enrique's crazy - was the one who did everything she could to make Judd believe in true love which can't be stopped. The romance wasn't an insta-love, while the attraction and the desire to get to know each other was there from the first moment, I-love-yous weren't said (or thought for that matter) until further into the story. They had to fight for each other, for what they wanted and yes at first Brenna was the one who did the fighting while Judd constantly tried to push her away - sometimes with definitely harsh words - but after he realized there's no denying their feelings for each other he did everything in his powers to get Brenna and make her extremely happy.

They are one of my biggest ships, if you read my blog/reviews you must know I'm a HUGE shipper and if things don't go my way... I'll seriously freak out. What I'm trying to say is have perfect these two were for each other, I love how Jude was still the cold psy for everyone even when he let Brenna saw how much he loves her, he laughed with her and let go of his control. Their scenes were wonderful, really I don't remember loving a couple this much after just one book in a long time. Look:


“Brenna’s eyes widened. Raising a hand, she brushed his hair gently off his forehead.“Why do I keep telling you things I swore I’d take to my grave?”The contact shot electricity through his nerves. “Because you know I’ll always be your shield against the nightmares.”

Brenna was fixing some kind of a small computronic device when he found her in her quarters. “Judd,” she said, putting down her tools. “You can’t be here. The dissonance..."


He interrupted her panicked words. “I need to ask you something important.”


“What could be more important than your life?” She sounded close to tears.“Your life. If you die, I don’t know if I’d stay sane.” A simple truth.

The characters from the first two novels weren't mentioned many times because they were in a different pack but we still had the chance to have an insight into their lives.

My favorite part was getting to know the leopards bit by bit, Hawke their alpha was the one I was most excited for (after Judd of course) and I really liked him, it's a shame I'll have to read six more books until I can read his story.

The political tension in the psy world grew and made me eager for more information. I like that with every passing book I can get to know - even if from a far distance - new shapeshifter packs. See, this is what I'm talking about, there is more to this book than just the love stories.

Judd: He was by far my most favorite male character from the Psy-Changeling series and I think this won't changed, not easily anyway. At first he seemed like he was anything but caring and loving but everything changed as he slowly gave in to the attraction between Brenna and him.


“Judd figured he must have done something right along the way. How else could a rebel arrow have earned the right to call this amazing woman his own? Even if it was a mistake, too damn bad. He was never giving her up.”

He had reasons, I mean real reasons not just some created ones for trying to keep Brenna at arms lengths. Counter to the synopsis I do think he had feelings from the first moment, if he hadn't had, then why the hell did he risked dying to save his family? The psys who are dead inside would sell their own children to protect themselves. All considered he was such and amazing hero: smart, caring when it came to his people, faithful and last but not least sexy as hell.

Brenna: She's my favorite female lead from Psy-Changeling so far, not just because she survived the worst kinds of torments but because she stayed strong even if sometimes she lost her belief in herself, she was persistent and would have fought to the end to keep her own sanity and to stay herself. What proved me her courage was how she didn't give up on Judd even when he tried everything to push her away, I won't lie to you some things he said to Brenna would have sent nearly everyone running, but not Brenna. She believed that they belonged together even when they had many-many obstacles throughout their way to each other.

Brenna's brothers were so amazingly overprotective, they protected their sister which was sometimes, well nearly always bothersome for her but I loved that after they realized that Judd is good for Brenna and loved her they accepted that Brenna was with a psy.

Since I first read about them I was curious about the Lauren family because it was clear even in the first book that psy families where there was actual love even for the children are rare and now we're talking about a psy family in which they actually fled and hid for the sake of the children. I was really happy that I could "meet" with the little ones as well as their father, I hope there will be more Laurens to come in the next books.

If you liked the previous books in this series I can assure you, you'll like Judd's and Brenna's story more.