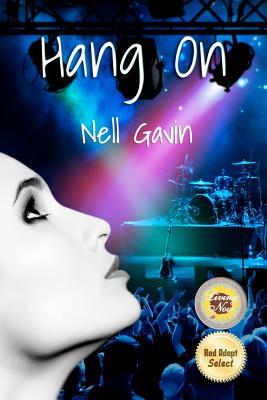 In 1973 "crazy" Holly unexpectedly falls in love with Trevor, a roadie for a famous English rock band. From the moment they meet, dreams of marriage, children, and a normal life are suddenly - finally - within Holly's grasp.
Trevor takes her with him on tour and introduces her to the very "un-normal" backstage world of Rock and Roll. When she steps onto the band bus, she walks into a colorful, exciting adventure in a world completely different from the life that awaits her back home, where she chases cockroaches with a shoe, works at a low-paying job, and sleeps to escape the hunger.

Unfortunately, Holly has a secret. Plagued by panic attacks, periodic rages, and depression, she needs to learn why her mentally ill mother committed suicide, long ago, so she can save herself. Thus far, she has found no answers. She must conceal her symptoms from Trevor in order to keep him, but as their relationship becomes progressively more serious, her illness becomes increasingly more difficult to hide.

I was provided a free e-book in exchange of an honest review.

I have mixed feelings... on one hand it was something new to me. Most books I've read about mental illness were much lighter than Hang On thus I could relate to the struggling character(s) better because they were more ordinary, meanwhile Holly's problems seemed more real but I couldn't relate to her because I can hardly imagine thinking the way she did. From the very first page I felt the need to take notes because even back then I felt this novel will leave me without a wholly-formed opinion. So my review is a bit more detailed than ever before.

The story started off magically good, I liked the writing style and felt sorry for little-Holly because of all the things she went through. The description of her childhood was much needed and made me being able to understand why did she become such a mentally-unstable young adult. Her mom committed suicide when Holly was approx. four and after that she was sent to her grandmother, who constantly hurt her either by words or by actually hitting her. When she became 17 she left school and moved out on her own and that was the part where the story kicked in but unfortunately this was the part where I lost half of my interest.

Holly was not just unstable but had very little self respect, she knew she was beautiful but besides that she never thought much of herself because of her family members leaving her. Now, what I didn't get was why did she keep in contact with her grandma? She was spiteful and Holly could see that she was wrong in so many things, still she kept talking to her and she even gave her presents!

Her other big problem was that there was no name for her illness and even her psychologist didn't know shit, he just kept guessing and prescribing ineffective medicines to Holly. She was really poor, she worked for very little money and was eager to save as much up as she could so she often went to bed without eating.

Now, there were times when it all started to add up for me but than Holly said or thought something utterly annoying or childish and that ruined the reading experience for me. She was childish on a lot of levels, okay she never learned how to love and what love actually means and she was taught she didn't deserve anything but hate so her rules about friendship were kind of acceptable, more so because she talked about them in the end. But she was prejudicial, she thought that every men is an asshole who wouldn't want anything from her but sex because she was beautiful, she was bathing in self-pity because she was gorgeous... what? She had far worse problems than this, like poverty for instance but she told the tragedy of being beautiful in pages... pages!

She didn't just hated all men but she was prejudicial of all the women too, because everyone became a jealous bitch as soon as they saw her, yeah she was that beautiful no one could look into her eyes. Not everyone is like this, yeah there are men who'll feel you up on the bus and women who'll be jealous of you but with Holly this things happened every day. One day four men called her a b*tch or the synonym of it because she rejected them. It was just sad how the author made it sound like everyone is the same... besides when she needed people who were not the same.

Holly had a friend at work, Angie who was really outgoing and she often brought Holly with her. The problem was that Holly never really enjoyed herself, there were times when she felt more miserable at a bar than alone. Anyway Angie knew a groupie, Karen who always got information about where rock-stars would hang out after their concert. One of these night Holly went with them and met with Trevor, a roadie of the band, and it was love at first sight, I hate insta-love and this was from the worst type. They spent the night together and started to plan how Holly was going to tour with them for a weak. Holly would have done anything to keep Trevor therefore she fought hard to hide her crazy, with or without success but even after quite a few occasions when it was clear that Holly was not alright, Trevor seemed blind to her problems.

I won't lie to you, I did not like how clueless he was all the time, sometimes Holly felt a deep hate inside of her but Trevor never saw the smallest sign of it. Problems started to twice and Holly had to struggle with herself harder than ever before, when she was with Trevor she couldn't bear him but when they were apart she was hurting more than ever.

I liked how it was thoughtfully described what Holly felt when she was in her rage and what was truly behind Trevor's words. What I didn't like at all happened twice, both occasions on the tour bus. Everyone was talking and as it always happens when there's many people there were more than one conversations going on at the same time and the author tried to illustrate this but all she did was made unable to focus on what they were talking about.

Travelling with the band was a fun experience for Holly which she tried to live as best she could but on her first day on the bus something happened what I hated. John was a member of the band and he hit on Holly hard time while Trevor was sitting there watching, lately Trevor told Holly this was just a test what John did to protect Trevor's heart because most girls are after the rock stars even if they hang out with the roadies. I think it was thoughtful of John to protect his best friend but Trevor should have gone there and send John to hell for touching his girlfriend when clearly she wasn't interested.

All the groupies seemed to accept Holly, if I have to guess which one is the more jealous a groupie or an everyday life women, I would put my money on the first. Not because I think they are bad people, but because they all want the same thing: travelling with the band and getting backstage passes, so I think if someone gets this opportunity and they don't, they'll be jealous even if they are the most generous women in the world. Don't you agree?

All considered I really enjoyed reading Hang On. I'm just sad for one reason: the blurb kind of suggests that the main point of the novel was for Holly to figure out her problems and start working on them but this never happened. The end closed things off on a pretty good note but Holly's recovery wasn't even written down, we learn from the end that she did get better but we could never see the process.

Trevor: He was a complete jerk from my point of view, I can see that he had a few good qualities and he clearly loved Holly but I still hated him. When Holly talked to John he listened to her while Trevor never cared about art so he never listened to Holly when she was talking about it, no matter how enthusiastic she was. She loved art and I think anyone who loves you, be a friend or more, should listen to you talk about the things that interest you, no matter if they are enjoying the topic or not. Trevor was far from perfect, he promised Holly he'd paid for her ticked but then she had to add money to it thus she had to land without any money and Trevor was actually angry at her! He told Holly just bring jeans and swimwear but they had to attend a party and when Holly had nothing to wear he freaked out at her and denied he ever said anything about what to bring.

Holly: My heart broke for her as I was reading about her childhood. I liked how she wanted to take care of herself and didn't need anyone to pet her. She even fought to learn more about her illness and kick its ass when she'll be able to. She never complained to anyone and she gave up on Trevor as soon as she realized she can't give him everything he needs. I liked how she didn't throw a tantrum when she got dumped and how she was able to forgive to Angie, who clearly didn't deserve it. Meanwhile I didn't like how prejudicial she was to a lot of people but this wasn't her characters fault, it was more the author's fault because she described it like there aren't better people than those who hurt Holly.

"I just wanted to be loved and liked for me. I wanted to love and like someone for him."

John: I really liked him and I'm very sorry because I wasn't able to read more about him, he was far more sympathetic than Trevor and a better person, if I can say so.

The other characters weren't bad either, I liked the description of Angie and how things ended with her. Karen seemed really nice from the beginning and she became a true friend of Holly, proving her prejudicis wrong. Holly's colleagues were totally mean who never deserved Holly's kindness but I liked how they were described. When Holly explained why she shouted at Geri and apologized, Geri told her if she could see there's something wrong with her than she sure as hell can change it, like mentally ill people would work like this... meanwhile some people do think this is the truth and Geri symbolized them.

I'd recommend it to those who are searching for a bit dark book filled with great moments in the mental illness category.