Melissa MacVicar - Ever Near (Secret Affinity #1) 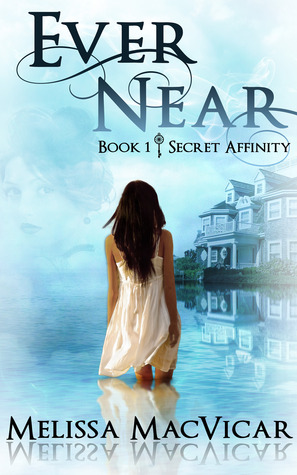 Love is ever near. But trouble is never far.

is haunted, but only sixteen-year-old Jade Irving knows it. Ignoring the disturbing spirits isn’t an option, because one dwells in the enormous historic home she shares with her newly blended family. Jade is finding it more and more difficult to explain away Lacey’s ghostly, anguished tantrums, especially with Charlie, her gorgeous, almost step-brother, living right across the hall.
When a power-hungry ghost hunter tracks down Jade and blackmails her, Jade’s secret teeters on the edge of exposure, and her entire future hangs in the balance. If anyone finds out Jade can talk to ghosts, her life will be forever changed.
Can she save herself, free Lacey, and hang on to her tenuous connection with Charlie? Or will everything she ever wanted slip through her fingers?

I was provided with an e-book for an honest review.

If I have to describe this book in one word I would say forgettable or ordinary, there wasn't anything exciting or really original about this book, meanwhile I didn't find many mistakes in it either so after all it was enjoyable just not in the way I was waiting for.

The main character is Jade who can see ghosts but not Casper friendly ones, not at all, these ghosts are mean and scary and they try to hurt Jade again and again. Jade and her mother moves in with Mike and his two sons when things between the two parents become serious, unfortunately for Jade she has a crush since god know how long on Charlie who is now her soon-to-be stepbrother ergo any relationship between them is wrong, at least according to Jade. Anyway the main concept is the ghost in the house, Lacey, who can do such things as entering Jade's dreams because of Charlie's curiosity and need to help Jade's secret is in danger more than ever before.

When I first read the blurb I thought it sounds like The Mediator by Meg Cabot after reading it I can assure you that I could find many resemblances to that book which just ruined the whole reading experience for me.

This wasn't an insta-love, it was something worse because Jade 'told' us that she knew Charlie for a long time at least from far and it was seeable that they were not strangers still something was clearly missing from their relationship, more so because they kissed very little into the story which wouldn't have been a bad thing if I had seen anything between them.

At many times I felt like the book lost all logic, here let me tell you an example. There was this ghost hunter guy who Jade talked to once and Charlie was angry at her for going because this guy could be dangerous. After a while Charlie asked Jade if she didn't want to talk to the guy. What?

The friendships weren't well-described either, besides Jade constantly thinking what a good best friend she has I never felt any connection, that's halfly because Ally was barely included throughout the whole book.

Jade's mum was written down like a self-centered bitch who always played the women without sins and would do anything to avoid others bad judgement. She's gone as far as assuming Jade was crazy without farther information, I hated her. On the other hand Mike was too kind and perfect.

Another thing I don't get is Jade hated Charlie's brother because he was rude to her and to her mum too, I kept waiting for him to be rude to either one of them but besides saying some things to Jade which he thought were funny he didn't do anything bad, he wasn't into this whole new family which I can totally get.

Jade didn't become my favorite character, by far, she didn't do anything but whined and she constantly felt sorry for herself, I can't even imagine how hard living with her ability must have been but there are people out there with far worse problems than hers. It was her point of view all along so I never got to know Charlie better and unfortunately Jade sometimes made him seem like a dumb child next to her. He wanted to help badly with everything he could offer and she never felt thankful inside, when Charlie searched the internet for ideas she got mad but when that stupid ghost hunter sent her a message in which he listed a few web pages which she already checked before (so she did use the internet too) she never freaked out. And if she really thought that doing the whole ceremony would turn out bad than why the hell didn't she protested more?

Charlie was far from a perfect book boyfriend, we never learnt since when has he liked Jade and he was a really plain character. It was so cute how he tried to help Jade but unfortunately I didn't learn anything about him besides his liking in Jade. He was always a little bit rash even with Jade, there was a scene in the cemetery which freaked me out. He saw how Jade felt after meeting with a ghost but without a second thought he took her to his mother's grave and didn't even felt sorry until Jade got angry.