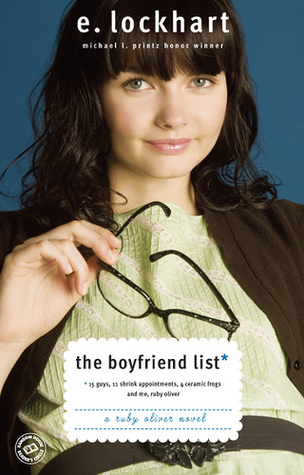 The Boyfriend List was soo frustrating, all the time I was reading it, I hated all Ruby's so-called friends. And a lot of boys from the list weren't important and a lot of were jerks there was like two who I liked and two who were friendly enough. Now, you must think I hated this book but actually no! There were a lot of great things, it's not a fluffy romance book telling a story about teenage love which will last forever, no The Boyfriend List is so much more than a light-read about a girl and her boyfriend issues.

Okay, so first let's discuss what do we know, shall we? Ruby got dumped by her boyfriend, not so long ago and for some unknown reason her friends aren't speaking to her, worse the whole school outcasted her for some reason, oh and she has tons of boyfriend problems.

The story's main brick is the break-up of Jackson and Ruby because it was the event what influenced everything else in Ruby's life. She began to have panic attacks so her parents sent her to a psychologist who asked Ruby to write down The List. The List was supposed to consist of all the boys she had some kind of interaction with, even if they weren't anything to each other.

Okay, so every chapter is about a boy, in somes she mainly talks about the boy and how they met or what they did together and in somes she just mentions them a few times. The boys had a big role because Ruby had to spill out every little detail to Dr. Z (her psychologist) meanwhile it was clear that her friend issues were just as important if not more.

Basicly before the incident Ruby wasn't too popular but wasn't unpopular either, she had three friends: Kim (who was also her best friend), Nora and Cricket. From the beginning I felt this deep furry inside of me, I mean what kinds of friends would leave Ruby even after they saw how everyone treated her? God, I hated all three of them, mainly Kim, she was a little bitch who couldn't see anything but her own problems.

“If those are your friends, you've got no need for enemies.”

This book was about so much more than boys, it was about real (or not so real) friendship and about changing and starting over. A week before the story starts Ruby thought that she and her friends will be together forever no matter what, or at least she and Kim will be but nothing happened as she expected it to.

“Noel shook his head. "You think better of this scene than I do, Ruby. Don't you see how fake those girls are? Let it go. Have a laugh about it when you're older. Forget that junk." I wanted to believe him, to skip off to some punk-rock hangout and develop ironic distance and start over in a universe where it didn't matter what any of these people thought about me. But I couldn't. I just loved them.”

There was another topic I really liked which was the rules about boys they wrote into a notebook. When Ruby and Kim started it but soon Cricket and Nora wrote into it too, everyone agreed to the rules such as never take away ones boyfriend or crush but if it's true love! Every single one of these rules looked good written down but in real life they didn't stand the test.

Ruby's voice was realistic, which doesn't mean that every teenage girl is like her but you got the idea. At first she sounded a bit childish to me, even for a 15 years old girl but as the story went on I started to, I'm not sure this is exactly the right word but, respect her. She did want Jackson back for shit-ton of time and did a lot stupid things which made her look and feel even worse than before but unlike most people in her place would, she put on her big girl panties and didn't cry herself to sleep when everyone despised her because of lies.

“When you hate someone you used to love, and you think he's done something awful - he probably has.”

The character development was freaking amazing, at first she pushed aside her own feelings and it took a lot of time for her to realize she didn't just lie to people about her feelings but to herself. Her psychologist helped a lot, and oh my god everyone should have a Doctor Z because she was really amazing, (despite the poncho).

Ruby: I loved her! She was really strong and her sarcastic comments totally brightened the story. Even when she was in an unpleasant situation she always had something funny to say.


“I say, thirteen is too many dogs for good mental health. Five is pretty much the limit. More than five dogs and you forfeit your right to call yourself entirely sane.Even if the dogs are small.”

Fine, she was a bit annoying sometimes but we should just skip it because she really did think that Jackson was a dreamy guy. As I said before she developed a lot, before she never told people her real feelings, like when Jackson hurted her without realizing it but in the end she even confronted a guy and asked something what have been bothering her for a long time.

“I sit around too much, waiting for other people to do stuff and angsting about stuff they've done, without doing anything myself.”


Kim: What a selfish bitch! God, I hate her and I hope to hell there won't be a cute reunion in the future because I'll freak out. They should call a truth or something but don't ever be friends again, please. If she had been such a good friend as she says she was, she would have waited a week or so before going public with that thing what I can't say because it's a spoiler. Oh and please couldn't she at least tell it in person and not on the f*cking phone? She wasn't just extremely self-centered, but she was cruel to Ruby. And accusing Ruby of being the untrustworthy one? Is she kidding? I mean she was the one who started it... Worst best friend ever, by far.

Jackson: Okay fine, I thought when I read the blurb, break up with your girlfriend if you don't love her or anything but making it sound like it was a what both of them wanted? What the hell is wrong with this guy? And after a few days he was so over it, actually I think he was over it before the break up but if he really felt that way why the hell couldn't he tell it to Ruby honestly, without obfuscation? Because he's an asshole, that's why.

The other characters weren't too important besides Nora and Cricket who instead of listening to both sides stood next to Kim and wouldn't even listen to Ruby. I can't even imagine acting like them, they didn't have any proof and they knew Ruby, their rule should have been to try to bring some peace without taking places... shallow, shallow friends.

I feel a bit bad for rating this book as I did but even if I liked it, it annoyed me at so many parts and comparing it to other books I would not feel comfortable giving it more stars, so this is it. Hope you enjoyed my review.

Okay, so if you read this book leave a comment, I'm dying to talk to someone who read it! Who did you hate the most? What do you think Kim should have done? What would you do in the place of Nora and Cricket? What would you do differently than Ruby did?