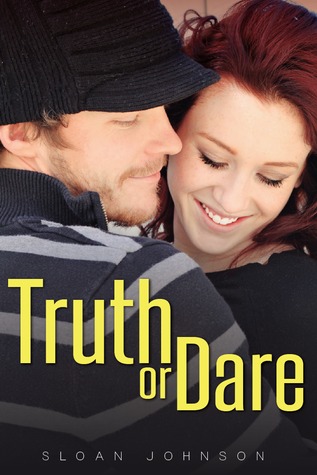 Lea Baker fell in love with Colby Davis four years ago. The problem? He sees her as one of the guys.

After the party from hell, both of them will be forced to face their true feelings for one another. Once the truth comes out, everything changes.

Review:
This review doesn’t just contain spoilers it is one big SPOILER.

Do not read my review if you liked the book because I don't want to hurt anybody's feelings, but a few may find some things offending.

This is my opinion and it should not make others hate this book.

Dumbest story ever, with so many clichés you won’t even find a single sentence which was creative or original. The story’s main theme is Lea’s and Colby’s relationship and that’s it. It isn’t cute, hot nor anything which could make a good romance, it is cheesy, boring, and predictable and I could go on and on until your ears start to bleed from all the bullshit.

Lea was this incredibly shy girl until she was introduced to Colby, a guy who is known and loved by everyone. He is of course every girls dream, and he kind of is a manwhore (at least this is what Lea thinks), typical, isn’t it?
We get to know that Colby feels the same way (jeez who thought?) but he would never ask out Lea because she deserves so much better (a “bit” cliché, don’t you think?). Colby sees that Lea is suffering because of his flirts but he thinks it’s better this way… what an ass, I mean do what you want but does he have to f*cking rub it into a girl’s face who is completely in love with him, and whom he loves too?

Then Lea gets drugged or something at a party and tells that she loves Colby, so they have to talk about this in the morning. When Lea wakes up and Colby is next to her, and she doesn’t have a lot of clothes on she thinks that they had sex and freaks out. Colby gets super hurt and when Lea’s best friend tells her that they didn’t do it, she apologizes and they talk thinks out with the help of a game they played in the past, it’s truth or dare (wow how original).

With every question he asks, there’s more anguish in his deep voice. And I did that to him.

I can’t say anything to this one, I seriously can’t.


“Ask any of them,” he challenges without shifting his gaze. “They all know there’s someone else that I can’t hurt that way. The furthest I’ve gone with any of them is some heavy petting in my car.”

Oh god, what a gentleman. Is it just me who didn’t throw away her brain after this lovely sentence?

When they said like three truths and one dare the game ends which surprised me, because what is the title of the book? Truth or Dare… you’d think that it is important for the story… but hell no, the whole talking part could have happened without this ridiculous bullshit. The dare is Colby’s who has to take out Lea for her dream date, so it wasn’t even Colby’s idea to take her out… she had to ask for it… damn this just keeps getting more unromantic as the time goes.
The date was the most boring thing I’ve ever read, really the most.

“Is it too soon for me to tell you that I love you?” he asks during the bridge. I look into his amber eyes and see the depth of his words. The words won’t form around the lump in my throat, so I simply lift myself onto my toes, softly kissing each corner of his mouth.
“No, because I’ve been waiting over three years to tell you,” I admit when I can speak.

What the hell am I reading? This is neither sweet nor cute, this is worse than the cheesiest thing I’ve ever read.

So they get together and I thought: keep reading the end must be very romantic… but it wasn’t. It was a totally unhappy ending: Colby left Lea to make his dreams of becoming a singer come true so they had to start a long-distance relationship. To make matters worse this book is going to have more parts… I don’t get the writer, this is a short story, but if she didn’t have a cute ending why didn’t she write a complete novel and continue with the relationship of these two? Usually people don’t make series out of novellas.

Favorite character: -
Least favorite: Colby, Lea and all the others

I don’t recommend this to anyone, but if you'd like to read it, don't let me stop you.

Have a problem or a remark? Write it down in the comment section but don't be an ass. :)
Written by: Veronika @ Wordy and Whimsical date: 15:55