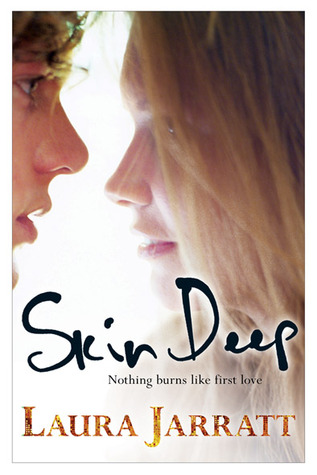 Ugly people don't have feelings. They're not like everyone else. They don't notice if you stare at them and turn away. And if they did notice, it wouldn't hurt them. They're not like real people. Or that's what I used to think. Before I learned...After the car crash that leaves her best friend dead, Jenna is permanently scarred. She struggles to rebuild her life, but every stare in the street, every time she looks in the mirror, makes her want to retreat further from the world. Until she meets Ryan. Ryan's a traveller. When he and his mother moor their narrow boat on the outskirts of a village, she tells him this time it will be different. He doesn't believe her; he can't imagine why this place shouldn't be as unwelcoming as the rest. Until he meets Jenna. But as Jenna and Ryan grow closer, repercussions from the crash continue to reverberate through the community. And then a body is found...

Skin Deep is one of the most wonderful books I’ve ever read. When I bought it I didn’t know how young the characters are and when I realized my mistake I thought: damn this will be stupid as hell. Anyway because I’ve already had it I started to read it and I was surprised in a good way. It isn’t lame, not at all, and even if the characters are really young (the girl is 14, the boy is 16) they got some pretty hard shit in their lives which made them more mature than others in their age.
However this book’s a little strange because even if it demonstrate real issues and not so perfect lives it’s still kind of a light read, at least it was for me.

If someone reads the summary of the book she probably thinks this is just another teen romance where the author tried to deal with hard problems in between the kissing scenes but couldn’t succeed. I’m more than happy to tell you this wasn’t the case in this book.
I think the main theme of the book was dealing with problems for example how the scar influenced Jenna’s life or the death of her best friend and letting go of the past. The second most important thing was the romance which was just as properly written, Ryan’s love and support helped Jenna through the hard times and he gave her back her love of life. The last was the mystery which started after half of the book and lasted nearly to the end. All these were amazingly written even the mystery wasn’t obvious so we can say the author created a balance between the themes of the book.

As I said it was pretty great, it wasn’t love at first sight and it wasn’t unbelievable either, besides the young age of the characters it felt much stronger than in other books. I loved these two together, it wasn’t just cheesy stuff like in most romances, they actually had problems which weren’t self created and they could talk to each other about these and tried to figure out their issues together.

There were some pretty deep problems in this book which weren’t just random issues thrown into our faces, each and every one of them were well-made. There were every kind of problems showing up in this book: family issues, mental-health, love and hate, self-hatred, death, moving on and depending on others opinion of you.

Besides the conflict between Jenna and her father all of these were perfectly built up, my favorite was the mental-illness of Ryan’s mother. It was so well-made how at first we had no idea about it so when Ryan mentioned it I was totally surprised which showed how a person with maniac depression can be completely normal in one moment then half-crazy in the next. It was showed from the point of an outsider too, through the eyes of Jenna, and we could see how much his mother's illness affected Ryan's life.

Jenna: She was so shy in the beginning and so suspicious of everyone even when they didn’t mean anything bad. I can’t even start to imagine how could she feel after the accident. She didn’t even wanted to be there that night and unlike the others she felt uneasy and everything what happened after… It would have been bad enough to know that your best-friend died when it could have been avoided but knowing that she died because of a guy who didn’t even come to her funeral? Horrible.
It was amazing to watch how she loosened up and started to make new friends and refreshed old friendships.

“But good girls don't do that, don't make a fuss, don't upset parents. And I was a good girl so I curled up on the floor and sobbed silently instead.”

Ryan: I love, love, love him. He was such an amazing and supporting character, he couldn’t care less about the scars of Jenna, they were a part of her and he could accept that easily. He always tried to protect Jenna, he wanted to stay away because he knew they’ll move away one day and he didn’t want to break her heart. How he took care of his mother was more than impressing and when he thought he did something the wrong way he always felt so bad about it.

“They’re just scars. They’re not you.”


‘Big isn’t always the best.’He turned to me, smirking.

‘Are you sure about that?’

Ryan’s mother, Karen: If she didn’t have her maniac depression she would have been an amazing mother. She deeply cared about her son and I don’t think she ever realized how much Ryan hates moving. I just don’t get why did she wanted to move in the end so badly… didn’t she see how much Ryan loved Jenna? How much they needed each other? She probably thought they will get over each other soon. She should have looked harder and see how deeply in love are they despite their young age.

“Scars are beautiful too, you know. They’re a badge we wear to the world to show we’ve lived. And that we’ve survived. So they have a beauty all of their own.”

I’d recommend it to those who’d like to read about a romance where the characters suffer from real problems.
Written by: Veronika @ Wordy and Whimsical date: 19:15