Jessica Sorensen - Lila and Ethan: Forever and Always (The Secret #4.5) 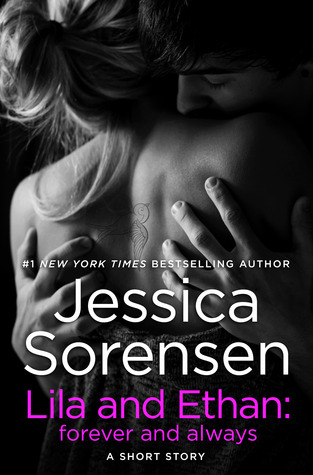 From the #1 New York Times bestselling author of the Ella and Micha series comes a story of love, risks, and rewards.

Lila Summers just wants to know one thing for certain: that Ethan Gregory will be with her always. Once her friend, he's become so much more, melting the pain of her past away with each kiss. Now Lila is on a road trip with Ethan, in the wilderness under the stars, and she can't imagine her life without him. But when she talks about the future, something in Ethan changes . . .

Ethan has no doubts about his feelings for Lila. His life with her gets better every day-and that's the scary part. How can he walk into a future where he has everything to lose? With Lila, his whole heart is on the line for the very first time. But if Ethan can't give her the promise she needs, his greatest fear might come true: he'll lose Lila for good.

She glances up at me with her brows knit. “You want to split up and? Like you take the a and half the n and then I take the other half and the d?” she asks, and I nod. “Wouldn't that look a little weird?”“Does it really matter if it looks weird?” I ask. “It'd mean something to us and that’s all that matters, right?”She considers what I said and then a smile breaks through. “I really love that idea.”

I was so happy when I heard about this because in their first book we didn't get a closure so I was curious how they will go beyond their limits, mainly I'm talking about Ethan's fear of marriage.
The story takes place while Lila and Ethan are on their road trip which they planned in The Temptation of Lila and Ethan. It's their time together in nature, outside of the real world, it's just the two of them in their own little bubble. This whole trip was (of course) Ethan's idea but Lila is happy with it as well, which is a surprise considering she was a total snob (still likeable) before. The story starts on the last days of their trip.

Lila isn't sure Ethan and she want the same thing because whenever she brings up their future Ethan starts panicking, so she doesn't even know if he can see them in five or ten years time still together, maybe even married. She got more disappointed after they met with Ella and Micha who had gotten married and are living their happily ever after.

I can relate to both of them, Lila has a home where her parents ignore each other so she always felt alone until she met with Ethan, it's totally acceptable that she wants to be sure of their future. Ethan is from a home where his parents are always arguing so it's normal as well, that he fears of becoming them. Ethan realizes something bothers Lila but he is afraid of the future because he always imagined himself as a carefree man, who can go wherever and whenever he wants, he's just sure about one thing: he can't lose Lila.

This book is really short, still it is important if you want to know about Lila's and Ethan's conclusion. There are sad and cute and sexy parts in this book which will make you crave for more of these two. Sometimes I wanted to slap Ethan because he was such a dick, but he could be so damn sweet as well. Lila isn't sure in herself and this is so sad because there isn't anything wrong with her (or for the record with Ethan). I was rooting for them since their first encounter and in many ways I love them more than Ella and Micha.

Recommend it for readers who at least read The Temptation of Lila and Ethan.
Written by: Veronika @ Wordy and Whimsical date: 19:03